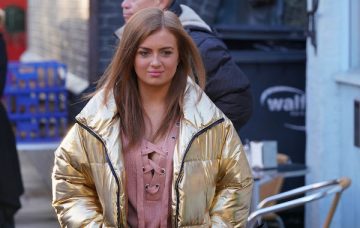 She has played Tiffany Butcher since she was six years old

EastEnders cast members have paid birthday tributes to Maisie Smith as she turns 18.

“Happy 18th Birthday to my (not so little) Baby sister! @maisie_smith_

“Love you so much, and hope you have an amazing day!” with a series of love hearts and lips emojis.

Tiffany left Walford in 2014, when her mum Bianca decided to move to Milton Keynes with her new boyfriend Terry, his children TJ and Rosie and her brother Morgan.

Tiffany and Morgan made an appearance again in 2016 for Whitney’s first wedding to Lee Carter and in early 2018, Tiffany returned to Walford to live.

Earlier this year, Tiffany started being groomed by a gang to deliver drugs.

Once her best friend Bernadette revealed what had been happening, Tiffany’s great uncle Jack stepped in to help, making sure Tiffany and gang member Evie were protected.

Tiffany soon revealed that she was raped but wanted to keep it between her and Jack.

A couple of weeks ago, Tiffany was shocked to see her rapist, Fraser, in Walford, but she later confronted him telling him to leave.

When Jack saw him on Albert Square, he ended up getting into an altercation with the gang member, before threatening to cut off his privates if he ever returned.

Recently viewers branded Tiffany as ‘cruel’ after she catfished her best friend Bernadette.

Others have predicted a love triangle between Bobby Beale, Tiffany and Keegan.

In May, EastEnders confirmed that Patsy Palmer would be returning as Bianca.