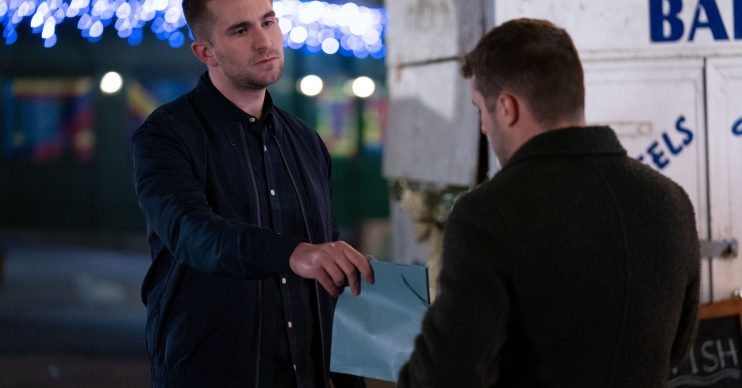 Over the last seven months, Ben and Callum have had a rollercoaster relationship.

Their most recent challenge comes after Callum helped Ben translate a business deal with Danny Hardcastle, as Ben has lost his hearing.

Read More: When is Danny Hatchard in Our Girl, is he returning to EastEnders and does he have a girlfriend?

But when Danny found out Callum is trying to be a police officer, he thought Ben was trying to stitch him up and wanted no more to do with him.

Later Callum found out Ben had left a nightclub with another man and was arrested.

Since Callum and Ben made up, Callum tried to be there to support Ben as he struggles to deal with his hearing loss.

In last night’s episode (Tuesday, March 31), as he wrapped Callum’s birthday presents, Ben told his boyfriend about how his dad Phil and Danny “aren’t big on diversity.”

Ben finally said it back!

Ben told Callum about when he first got a hearing aid that Phil never asked about it.

However, Callum told Ben that he’s amazing and that he’s stronger than Phil or Danny will ever be.

Callum also reminded Ben that he would always be there for him.

Touched by Callum’s words, Ben confessed to his boyfriend that he loved him.

Callum responded by signing ‘I love you too’ back to Ben, leaving fans in floods of tears.

Having a few drinks and catching up on 2 weeks worth of #Eastenders.
I just actual screamed 'OMG CALLUM JUST SIGNED THAT HE LOVED BEN TOO BECAUSE HE'S DEAF AND HE LOVES HIM' & @jxmes7799 looked at me and went 'stop with the the gins' but I cANT I LOVE THEM

Ben and Callum scenes were great. Ben finally said "I love you." Which is a big deal. Last time he said that, it was to Paul, who got killed a short while later. I liked Callum's speech. Less gangster stuff and more of the domestic stuff like today. #Eastenders

Callum signing I love you to Ben.😭😍💙 #EastEnders #Ballum

BUT BEN ACTUALLY SAID THOSE THREE WORDS I MEAN I KNOW IT WOULD HAPPEN TONIGHT BUT WATCHING THE ACTUAL SCENE JUST HIT DIFFERENT #EastEnders #ballum pic.twitter.com/ZirTysM6xa

Later, Callum encouraged Ben to learn sign language. He also gave Ben a watch with an alarm that vibrates to help him get up in the mornings.

Could this be a turning point for Ben?

Next week, Ben learns his dad Phil has gone to the police about his role in the boat crash.

Will solicitor Ritchie be able to step in and help?

One year of Max Bowden

On April 1, 2019, actor Max Bowden made his first appearance as Ben Mitchell.

He became the sixth actor to play the role of Ben, and immediately made it his own.

A year ago @MaxBowden first appeared as Ben Mitchell in Eastenders “Hello Dad”
He came into the show and made the character his own, showing his diverse acting skills, talent and ability to tackle and storyline that comes his way. ❤ #MaxBowden #BenMitchell #EastEnders pic.twitter.com/kCFZzut7Ll

In the last year he has been involved in (almost) every plot on the soap!

From getting involved with gangster Danny Hardcastle, to his affair with engaged Callum, Ben has been at the forefront of the soap’s biggest storylines.

He took centre stage along with the Mitchell family for the 35th anniversary in February of this year as Ben helped his dad, Phil, get revenge on Keanu Taylor.

Keanu had had an affair with Phil’s wife Sharon and got her pregnant.

He’d also got Phil’s son – Ben’s half-sister – Louise pregnant and was engaged to her.

When Keanu returned and kidnapped Callum, Ben saw red and vowed to save his boyfriend.

The ultimate showdown on that fateful boat trip saw Ben lose his hearing as a result of the vessel crashing.

Did you watch last night’s EastEnders? Leave us a comment on our Facebook page @EntertainmentDailyFix and let us know what you think!