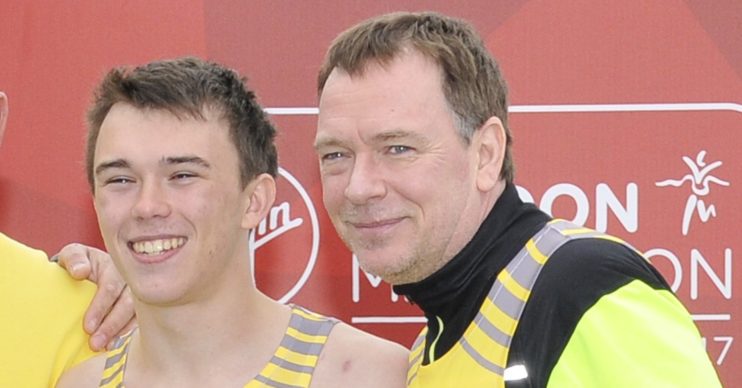 The actor's real-life son made his debut

EastEnders bosses brought in the real-life son of Adam Woodyatt to arrest his dad.

Businessman Ian Beale was arrested on Friday night’s episode of the soap – and there was no social distancing.

And now the soap has revealed how they pulled it off – by bringing Adam’s son Sam in to play the arresting office.

As the father and son share a bubble it meant the soap could include more realism into scenes.

Tina Carter had tried to send him away by reporting him for mortgage fraud.

Viewers know he secretly and illegally took out a mortgage on his mum Kathy’s cafe.

However his arrest was short-lived as Kathy told the police it wasn’t fraud – and had him freed.

Unfortunately for Ian it put him on a collision course with his true enemy.

And he was soon violently assaulted and left for dead.

But who tried to kill him? The soap revealed eight suspects.

Tina was seen back at Gray’s washing blood from her hands and face.

However, Rainie Highway could be seen rushing through Walford on a mission.

Ian had ruined her chances of being a mother again.

Her husband Stuart could be seen burning something at the allotments.

Ian’s brother Ben could be seen leaving the pub where Ian had been attacked.

Peter Beale, still furious at his dad, could be seen nursing his own wounds looking bloodied and bruised.

His brother Bobby looked to be suffering from a mental health episode in an alleyway after Peter tried to convince him to kill Ian.

However, Max Branning could be seen looking like he had taken revenge on Ian for his blackmail attempts.

And Suki Panesar rounded out the suspects but looked a lot less suspicious than the rest.

However, she sat at a bar in front of the CCTV – looking like she was setting up her own alibi for Ian’s attack.

However fans are convinced it was none of them – and actually Sharon Watts is responsible with estranged husband Phil Mitchell.

Who do you think did it? Leave us a comment on our Facebook page @EntertainmentDailyFix and let us know what you think!