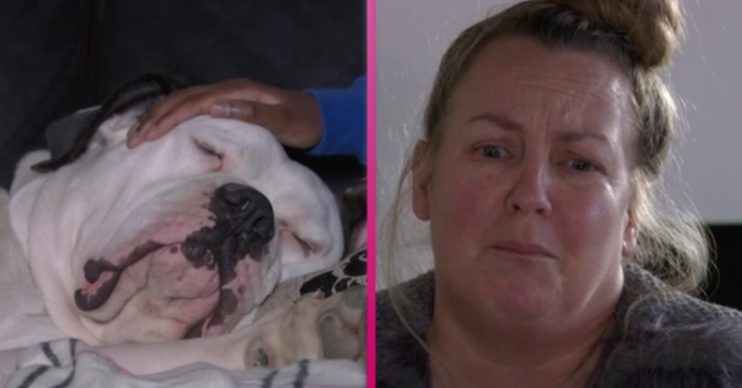 Bronson has been unwell

Last week, the Taylor/Baker family were left devastated when they were told their dog Bronson needed to be put to sleep.

Bernie spoke to the vet as poor Bronson kept being sick. They explained that as he was old his body was starting to shut down and he was in a lot of pain.

The family had one last weekend to spend with him.

In last night’s episode, Bailey tried to fight to keep Bronson alive. However Mitch explained that Bronson will die no matter what as he is unwell and he is in pain.

Read more: Lucy Speed plays Marnie in Unforgotten: Will she ever return to her role as Natalie in EastEnders?

The vet came over and as the family talked about his favourite food, Bronson died led next to Bailey.

Viewers were devastated by the scenes and said they were left sobbing.

Bronson has me crying. the scenes with the Taylors hurt. #eastenders

Never thought I’ll be the one sobbing my heart out because Bronson the dog just passed away #EastEnders pic.twitter.com/KXOcUpW7OL

Some even said that the dog who plays Bronson deserves an award for the scenes.

Get Bronson a bafta #EastEnders

Bronson better get a soap award for this brilliant performance #EastEnders

EastEnders: Who is Bronson?

Bronson first appeared in 2017 when Karen Taylor moved to Albert Square with her children Keanu, Keegan, Bernie, Chatham and Riley.

One of his famous scenes was when he ended up in the park pond after Kush Kazemi stopped him from tugging on Denise’s bag.

Keegan was furious with Kush over this and the police went to talk to Kush about the incident. However Karen decided not to make a complaint.

In 2019, Bailey Baker first appeared and was later revealed to be Mitch’s daughter, making her the half-sister to Karen’s kids Chantelle and Keegan.

At first Bailey was a bit nervous of Bronson but she soon grew close to the dog and they became best friends.

Did you watch last night’s EastEnders? Leave us a comment on our Facebook page @EntertainmentDailyFix and let us know what you think of these soap spoilers.