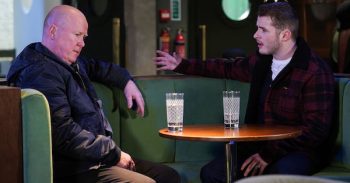 Ben isn't done with trying to destroy his father just yet

The Mitchell family is set to be plunged into chaos in EastEnders over the summer.

The producer, who works alongside overall boss Kate Oates, told the Metro: “For the Mitchells, it is fair to say Ben’s return hasn’t gone the way he planned but he’s proven himself to be a man who will go to any lengths to get what he wants and that doesn’t stop with his scheming – it extends to his love life too.

The hints suggest that Ben might have a new love interest – one that will cause chaos in the Mitchell house.

Could the fan-rumoured affair between Ben and Gray Atkins be happening? Or could Keanu be going for the Mitchell hat trick?

Another option for the unexpected twist could be the reveal of Sharon’s affair with Keanu.

They have managed to keep their love affair a secret ever since ending things, but with Louise Mitchell pregnant and secretly planning an abortion with Sharon’s help, it could all be set to come out.

If Keanu discovers Sharon’s role in helping Louise, then he may feel he has nothing left to lose and confess everything to Phil.

But would he survive Phil’s wrath when he unleashes his rage about his cheating wife and the man he’s thinking of as a son?

It’s not just the Mitchells who will be filled with drama, as the Slater family is split when Kat and Stacey go to war.

Jon added: “The Slaters haven’t had an easy ride over the past few weeks but the drama doesn’t stop there – when loyalties are tested, Kat and Stacey go to war, giving fans another chance to enjoy Jessie Wallace and Lacey Turner at their finest.”

Are you excited for EastEnders’ summer? Leave us a comment on our Facebook page @EntertainmentDailyFix and let us know what you think!