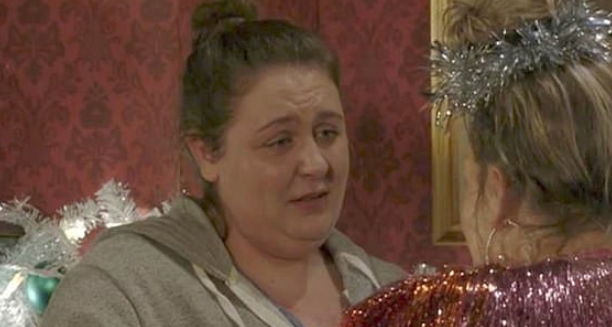 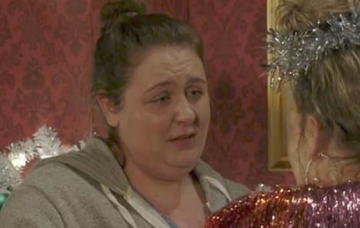 We weren’t sure what to make of the Taylors when their arrival in Walford was first announced.

But Karen and her clan have swiftly won a place in EastEnders fans’ hearts since landing in Albert Square.

And viewers were touched by scenes in the New Year’s Eve episode as Bernie finally admitted what we have long known… she is in love with Tiff.

She and her best friend shared a heart to heart in the cafe, as Bernie told her she didn’t want to spend time with Tiff’s new friend, Evie, because “she is a cow”. (That’s an understatement!)

Tiff assured Bernie that she was her true friend… but still left her alone as she went to party with a ‘cooler’ crew.

Sobbing Bernie went to the Vic where she told Karen, who was already three sheets to the wind, that she had fallen in love… with a girl.

Karen’s reaction was everything we’d come to hope; she stood on her seat, told the whole pub how proud she was of her daughter, then fell off and snogged Billy!

Viewers were impressed with the undramatic treatment of Bernie’s coming out.

I really loved the understated way Bernie’s coming out was handled while Karen is still very much her fun-loving self. #EastEnders

Bernie: I think I’m in love, with a girl. Do you hate me?
Karen: how could I ever hate you? You are who you are my darling I’m so proud of you.
Well done #EastEnders for showing that there is a variety of coming out stories and for some #LGBTQI it is that simple. 🏳️‍🌈

Also, I’m actually really intrigued to see how they go with this Bernie and Tiff storyline 🙂 #EastEnders

karen’s reaction to bernie coming out WE STAN #EastEnders pic.twitter.com/YLSNel0lit