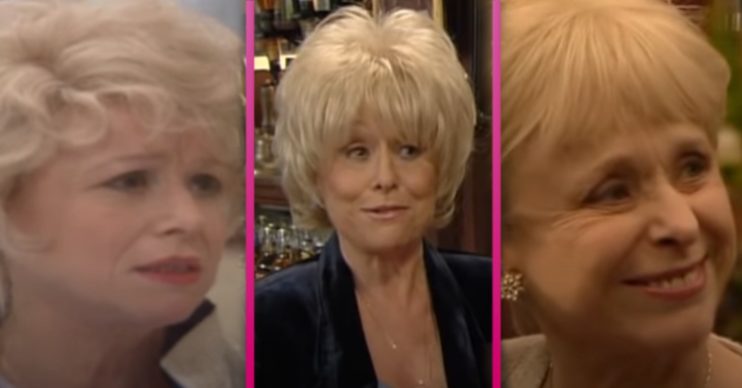 EastEnders Barbara Windsor sadly died yesterday (Thursday, December 10 2020) at the age of 83. The actress died at 8.35pm at a London care home after battling Alzheimer’s. Barbara is well-know for her roles in the Carry On film franchise and in EastEnders, where she played Peggy Mitchell from 1994 until 2016. Read more: Barbara […]

The actress died at 8.35pm at a London care home after battling Alzheimer’s.

Barbara is well-know for her roles in the Carry On film franchise and in EastEnders, where she played Peggy Mitchell from 1994 until 2016.

Read more: Barbara Windsor death: How do you die from Alzheimer’s?

Throughout her 22 years on the BBC soap, Peggy had some truly iconic moments and storylines.

Here are the top 10 Peggy Mitchell storylines and moments.

Of course when Peggy discovered that Sharon had cheated on Grant she was furious.

Peggy ended up confronting her in the market. She told her she wanted to have a chat with her, but when Sharon asked what about, Peggy replied saying: “Nothing really. Just about you being a two-faced lying little [bleep].” The word began with a W and rhymes with boar.

After giving Sharon a slap, she warned her to keep away from both of her sons.

In 2002, Peggy and Pauline Fowler got into an almighty fight in The Vic over baby Louise.

Phil handed his daughter back over to Lisa and Peggy was furious.

This soon led to Peggy and Pauline having a huge argument calling the Fowlers “a pack of liars.”

But when Pauline said it was ‘a miracle nobody shot Phil sooner’ Peggy lunged at her yelling at her to get out.

In 2009, Boris Johnson visited The Queen Vic. But rather than giving him a piece of her mind, the pub landlady was star struck.

She told the mayor of London: “I do so admire a man who devotes his entire life to serving society. I nearly went into politics myself you know?”

Boris Johnson, who is now the UK’s prime minister, gave her his card, telling Peggy he was open to ideas on how he can help Walford.

In 2010, Phil set fire to The Queen Vic. Peggy refused to leave at first but was eventually forced out.

As Phil was still inside, Peggy and Billy went in to get him. Peggy was forced to watch as her pub beloved burned.

She soon decided to leave Albert Square and didn’t return until 2013.

In 1996 Peggy was diagnosed with breast cancer and in 1999, she underwent a mastectomy.

The emotional scenes saw Barbara Windsor pick up the award for Best Actress at the British Soap Awards.

In 2005, Den Watts was killed by his wife Chrissie, but Peggy’s daughter Sam was framed for his murder.

When Peggy discovered the truth she stormed up to the grave during Den’s burial and began confronting Chrissie.

She yelled: “Tell us what you did to him” before smacking Chrissie.

She fell down and into Den’s grave. Peggy then screamed: “Tell Den you’re sorry. Tell Den.”

In 2016, Peggy made her final appearance.

The character discovered her cancer had returned. But Peggy made the decision to go out on her own terms and overdosed on medication instead.

In her final scenes, she was joined by the ghost of long-term love rival turned friend Pat Butcher, played by Pat St Clement.

Peggy told Pat: “I will go as I have lived – Straight back, head high, like a queen.”

The two women called each other a cow and a word that rhymes with witch one last time.

Peggy soon died in her bed.

In 2000, Peggy discovered her husband Frank had been having an affair with his ex-wife Pat and the two planned to run away together.

She humiliated them by reading out a letter, detailing their plan to flee.

Afterwards Peggy said: “But one think I’ve learnt since I’ve been married to Mr Butcher, is never underestimate his capacity to make a cock up of things.”

Peggy then proceeded to slap both Frank and Pat before yelling: “I hope you all enjoyed the fireworks, goodnight.”

Read more: Barbara Windsor death: What were her most famous film and TV roles?

In 2008, Pat and Peggy the two got into another argument over Frank.

In an iconic scene, Pat pointed out that she and Frank once lived happily in The Vic together,

Pam responded by slapping Peggy back saying: “You cow!”

Shortly after Peggy exposed Pat and Frank’s affair, Pat walked back into The Vic bold as brass, ordering a gin and tonic.

Peggy got the drink for Pat. but threw it over her before telling her to get out of her pub.