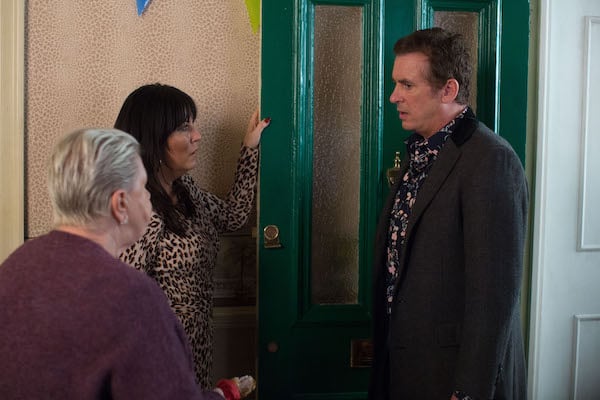 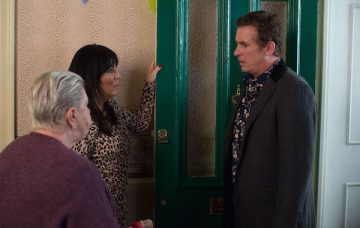 Alfie Moon is back in EastEnders and after all the to-ing and fro-ing over the last few weeks, he finally reveals why he’s back next week.

After rocking up unannounced on the Slaters’ doorstep he tells Kat he’s sorry and he wants to win her back – and rope her into his new business idea, of course.

Jean is fuming to see him and desperate to protect Hayley and her secret, orders him away. Alfie agrees and heads off to get the boys, but Jean is determined to persuade Kat she should put off seeing her sons too.

Everyone’s pretty confused by her behaviour, but Alfie is determined, and using Hayley’s surprise party as a distraction he invites loads of people to join the celebrations, before sneaking back inside, past Jean and the rest of the family, to talk to Kat.

She’s hiding in the bathroom, but he manages to have a heart to heart with his estranged wife before Kat is reunited with her boys. But what about her man? Are they going to give things another go?

It might not be that easy, when Alfie finds himself holding the baby at the Slaters’ – and then discovers Hayley is her mum.

Even Alfie’s got enough brains to figure out from that he’s the daddy and as he reels from the bombshell, he demands answers over why she didn’t have an abortion.

But he has to ditch the talking when Kat turns up and wants to discuss what him being back means for them.

Finally getting some time alone with Hayley later on, Alfie tells her in no uncertain terms he’s there for Kat, but he wants to be a part of his daughter’s life – because that won’t be complicated!

With Hayley threatening to reveal all to Kat, Alfie tries to take his mind off it by throwing himself head-long into his new business: Blue Moon Funerals.

Hayley is convinced the help him out and when she sees how much their little girl means to him, she starts to soften. But Jean is furious to see him then turning on the charm with Kat, and realising how gutted Hayley is, Jean tells him she knows about the baby and he has to tell Kat – or she will.

As Jean demands Alfie come clean about everything, will he do it?

And how will Kat react?

The secret is set to come out sooner rather than later, with big Slater scenes set to be central over Christmas.

Is Alfie’s return doomed? Can he really stick around once all the women in his life turn their backs on him? Or will Kat forgive him once again for the sake of their boys?

Should Kat and Alfie get back together? Leave us a comment on our Facebook page @EntertainmentDailyFix and let us know what you think.