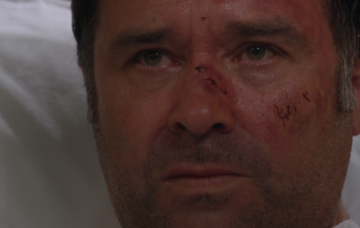 Did this moment between Emmerdale’s Graham and Noah prove Joe Tate is still alive?

Did we hear that right? Yes!

Devotees have been reluctant to accept Joe, played by Ned Porteous, was killed in October following a clash with Cain Dingle.

His twitching body was last seen being hauled into the boot of a car by dedicated pal Graham – with the belief Joe’s right-hand-man may have finished him off.

But the body of Debbie Dingle’s love interest has not been recovered, which many fans believe means Joe’s fate could yet be unresolved.

Just a few weeks ago the soap’s Twitter account also hinted Joe’s death could have been faked when it asked followers about his and Debbie’s future together.

And following a conversation between Graham and Noah towards the end of Monday’s instalment, viewers’ hopes have been raised yet again after Joe’s fixer seemed to suggest Ned’s character is still very much part of the present, rather than the past.

Indeed, it was Graham’s particular use of tenses when expressing how Joe considered Noah that had many of those watching worked up.

“Joe loves you, you know,” Graham reassured Noah after tense scenes in which the teen admitted to pinching Daz’s car – but not to knocking over Graham while joyriding.

Noah didn’t appear to take too much notice of the fact Graham was using the present tense rather than the past tense. Excitable viewers, however, did.

Answering their own question, one fan pondered on Twitter: “Was it a mistake in the script? #ithinknot #Joewillbeback.”

“HUGE clue he is still alive,” added another viewer.

A third concluded: “Is Joe still alive..  Of course he is…”

Many others also noticed the irregular tense usage. However, several more did offer a credible explanation for Graham’s phrasing.

Indicating most of the soap’s other characters – Graham, Cain and Moira aside – have no idea Joe could be dead, one fan replied: “As far they are all know Joe is still alive.”

“Ah but Noah doesn’t know Joe’s supposed to be dead. Graham is keeping up the pretence,” pointed out another, supporting the valid point.

We can still hope, right?

#Emmerdale Graham said to Noah, “Joe loves you, you know”. He didn’t say past tense, “loved”.