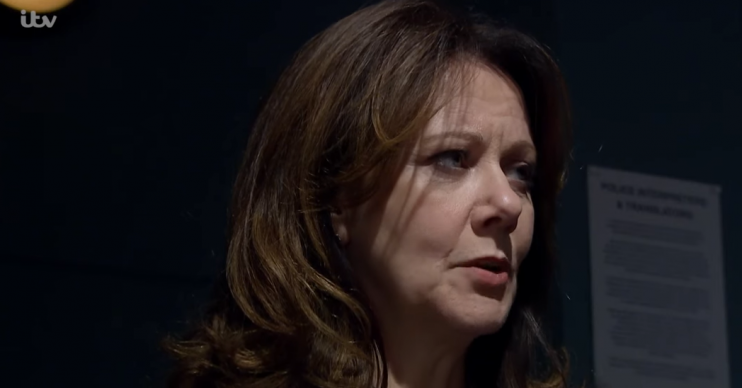 We knew she looked familiar!

Detective Inspector Dent made her debut in Emmerdale this week, when she began her investigation into the grisly murder of Graham Foster.

On Tuesday (January 28), some soap fans were fuming with the Hotten policewoman and her colleague when they arrested Marlon Dingle for the crime.

Of course, viewers know they have the wrong man… The murderer is in fact Rhona Goskirk’s ex-husband and rapist Pierce Harris.

As the police investigated the crime and the many suspects who had a motive to kill Graham, some of those watching from home didn’t fail to recognise DI Dent from her previous popular role in another ITV series.

The copper is played by actress Linda Armstrong – who has a link to the ITV soap already.

Read more: Emmerdale SPOILERS: Marlon won’t be back in village ‘any time soon’

Linda played Sister Brigid on Heartbeat spin-off The Royal between 2003 and 2011.

Brigid was the nursing administrator who oversaw the ward at St Aidan’s Royal Free Hospital.

During her time on the hit ITV show, Linda starred alongside actress Michelle Hardwick – who fans now know plays Vanessa Woodfield on the soap.

Linda has also appeared in EastEnders and Coronation Street over her 25 year career.

In Corrie, she played a prosecution barrister in 2018, while in Walford she appeared as Katie McCoy in 2015.

The actress has also appeared in Doctors and Casualty in numerous guest roles.

Fans commented on her guest appearance on Twitter, with one typing: “Jeez, didn’t recognise Sister Brigid from The Royal as DI Dent in Emmerdale!”

Sr. Brigid in The Royal is now a detective?

Zoe Henry K I L L I N G it. That was a bang on reaction. DI Sister Brigid won’t suspect Rhona. #Emmerdale

Another said: “Sister Brigid is looking super hawt as DI Dent in Emmerdale.”

A third joked: “Sister Brigid in The Royal is now a detective?”

Irish actor Simon has appeared in Trollied, Coronation Street and The Fall.

It’s not yet known how long the Hotten detectives will be on the soap for, or when the real killer Pierce will – if ever – be caught…

Did you recognise either of the new detectives? Leave us a comment on our Facebook page @EntertainmentDailyFix and let us know what you think!