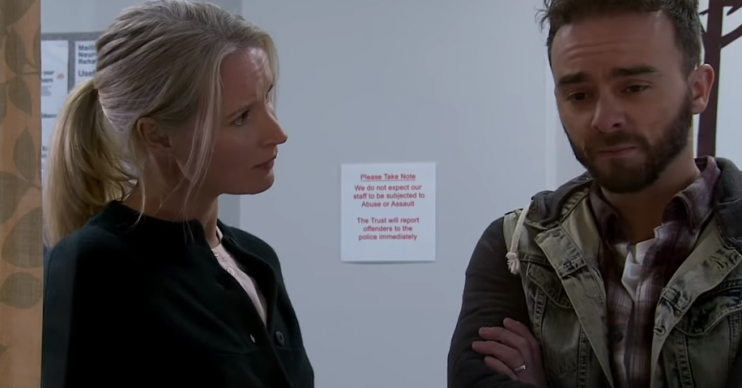 Shona is in a special care unit in Leeds

Fans of Coronation Street have slammed the soap as David Platt was told he wasn’t allowed to see his wife Shona Ramsey, who has memory loss.

Over Christmas, Shona was shot and soon took a turn for the worse and went into a coma.

However when she emerged from her coma she couldn’t remember David or the life they had built together.

Recently Shona was moved to a specialist care unit in Leeds, which has made visiting Shona difficult for David.

In Monday’s episode (Monday February 10 2020), David crashed his car into a skip, writing it off, meaning he would now have to get the train to visit his wife.

In last night’s episode of the soap (Wednesday February 12 2020) David arrived at the unit and told a carer he had taken two trains to get there.

However, the carer told David that Shona no longer wanted him to visit her as she thinks of him as a stranger.

However viewers weren’t happy that David travelled all the way to see Shona, only to be turned away.

#Corrie so you drag David on 2 trains to the hospital to tell him it's best he doesnt see Shona …. telephone????

Poor David, made that long journey to be told to go home. #Corrie 🙄

The hospital couldn’t have given David a call. #Corrie #CoronationStreet @itvcorrie

Why did David not phone before he travelled for 3 hours to see her? #Corrie

Poor David, they could of rang him before he got the train, although he probably would of insisted on going, #corrie

Is there any traumatic experience David Platt hasn’t been through yet?! #Corrie

David being told he can't see Shona, must be heartbreaking after he's travelled all that way #Corrie

Viewers know Shona and David have been through a lot in their relationship.

After they met, David discovered Shona’s son Clayton was the one who killed his first wife Kylie.

Eventually the pair decided to make a go of their relationship, however it’s not all been smooth sailing.

However, Shona found out the reason for David’s change in behaviour was because he had been raped by Josh Clayton.

They could have rung him before he got the train.

Shona stood with David but they were faced with more drama when Clayton escaped prison and took his mum hostage.

Shona was forced to stab Clayton as he attacked her and after he was captured, she decided not to see him anymore.

Luckily Paul Foreman stepped in and convinced Josh to tell the truth.