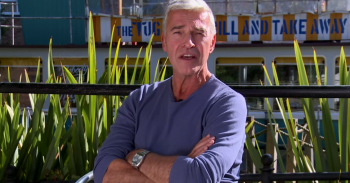 He's called for employers to do more to help

David Easter has opened up about his 20-year battle with depression, and urged employers to “do more” for people with mental and physical disabilities.

The former Hollyoaks actor – whose character Mac Nightingale was killed off this week – has suffered from clinical depression for the past two decades, and he wants to encourage bosses to help others in the same situation.

He said: “I apologise for some of my tweets. I suffer from clinical depression. I was diagnosed 20 years ago – it’s a battle.

“I would love everyone to know that employers have to do a lot more for people with any disability, mental and physical.

“You’ve got to do more. Embrace it more, care about it more and love more. Because with love you can do anything.”

David has been “blown away” by the support he has received after his final scenes aired on Hollyoaks’ E4 episode on Wednesday (20.03.19), and he thanked Lime Pictures for the “brilliant” stories he’s had.

“I’ve had so many messages of love and support as the character and as David. I love each and every one of you for it.

“I’m just blown away by it.

“Thank you to everyone at Lime, I miss you. Thank you for all the storylines I’ve had, which have been brilliant.”

The actor has confirmed he has left the Channel 4 soap forever, despite admitting it would be a “very good idea” for him to return to the village as Mac’s “evil twin”.

He added: “Mac had to go, it was the end of my time. I couldn’t do anymore.

“It’s right to leave the show, and I won’t be back.

“There will be no ghosts, no evil twin, although that’s a very good idea. But it’s never going to happen.”

Mac was bumped off by serial killer Breda McQueen, who is played by Moya Brady, after she poisoned his lasagne, and he praised the “magical” actress for being “so amazing” in his final scenes.

Speaking in a video on his Twitter account, he added: “I want to thank Moya for being so amazing in killing me off.

“It was a fantastic scene and she’s such a lovely, funny lady. I love her. She’s magical.”