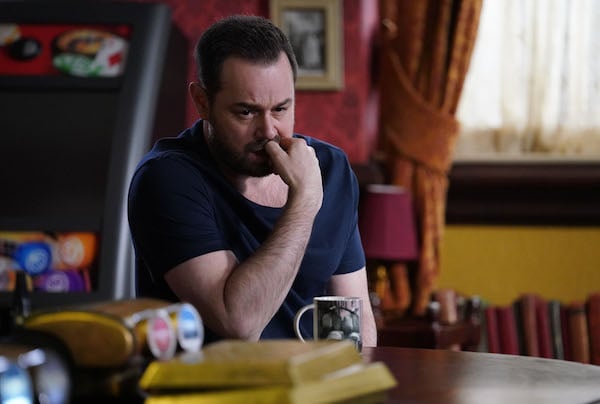 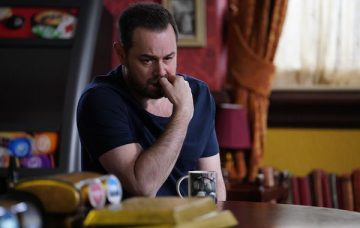 With Danny Dyer taking a break from filming next year while he appears in a new theatre role, it looks like Mick’s imminent trip to jail could become more long-term as the character is written out of the show.

Tonight’s visit to Walford sees yet another twist in the ‘who shot Stuart’ saga as the villain wakes from his coma.

The Carters are relieved when doctors say they’re going to try and wake the patient, believing that when Stuart comes round he will do the right thing and tell the police the truth about what really happened that fateful night.

But, of course, this is Stuart we’re talking about, and nothing is ever that simple.

Instead of lifting the blame from any of the Carters, he does exactly the opposite and tells the police that Mick was the one who shot him.

But that’s not all – tomorrow’s episode will then see police act on Stuart’s claims, arresting Mick for trying to murder his ‘frememy’ in cold blood. But have they got the right man?

As the Carters are left reeling from this latest turn of events, it looks like it’s all about to get too much for Linda, and by Thursday’s episode she is storming to the hospital to confront Stuart herself.

But of course this isn’t going to help Mick’s case and with his bail hearing looming at the end of this week, things don’t look good for the pub landlord.

With it looking more likely that Mick could be facing a long stay behind bars, could this mean the way has been paved for Danny Dyer’s character to be temporarily written out of the soap?

Read more: EastEnders fans have the BEST theories about who shot Stuart Highway

It was recently revealed that Danny would be taking a break from the show at the start of next year as he prepares to tread the boards in a new theatre production.

He will be appearing in ‘A Slight Ache’ and ‘The Dumb Waiter’ from 31st January and 23rd February 2019 alongside another famous face, Martin Freeman.

Martin, of Sherlock and The Office fame, will be joining Danny on stage at the Harold Pinter Theatre in London’s West End.

Let’s hope that Mick’s stay at Mer Majesty’s Pleasure doesn’t become too long-term, but with Stuart’s vendetta against the Carters looking unlikely to end any time soon, things are looking bleak for Mick.

EastEnders airs these scenes this week.

Do you think Mick will be going to jail for a long time? Leave us a comment on our Facebook page @EntertainmentDailyFix and let us know what you think!