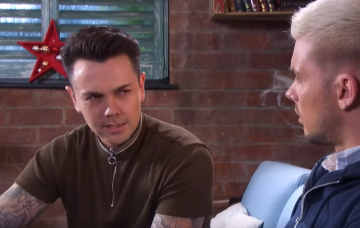 The skating star is in the new winter trailer

The former Brookside actor is to star as no-nonsense Jonny in the Channel 4 soap, which will see him will befriend Ste Hay (Kieron Richardson), who is out for revenge on Misbah Maalik (Harvey Virdi) after she accidentally caused Tegan Lomax’s (Jessica Ellis) death during the recent storm.

Read more: Hollyoaks star didn’t want to be killed off

In the new Hollyoaks Winter Trailer, released on Monday November 19 Jonny is seen for the first time as he tells Ste: “I know you’re angry, I’ve got your back.”

Ste then says: “Those Maaliks deserve everything they get.”

Elsewhere in the trailer, serial killer Breda McQueen (Moya Brady) looks set to kill again, just weeks after she murdered Russ Owen (Stuart Manning), and it was revealed she was responsible for the deaths of Carl Costello (Paul Opacic) and Glenn Donovan (Bob Cryer),

In the clip, she is seen standing over a lifeless body saying: “Sorry, bad dads don’t get second chances.”

It doesn’t look like an easy winter for Sinead when she is exposed as a former prostitute by newcomer Donna-Marie Quinn (Lucy-Jo Hudson), who doesn’t take fools gladly.

There will be further infidelity fireworks in the village when Leela Lomax (Kirsty-Leigh Porter) proposes to her boyfriend Louis Loveday (Karl Collins), despite being unaware he could be set to become a bigamist because he is already married to his ex-wife Simone’s (Jacqueline Boatswain) sister Martine Deveraux (Kelle Bryan).

To make matters worse, he’s been sleeping with Simone, and could end up in prison if he marries Leela.

Hollyoaks airs Monday to Friday on Channel 4 at 6.30pm, with a first look episode every night on E4 at 7pm

Are you looking forward to Ray joining Hollyoaks? Let us know what you think by leaving us a comment on our Facebook page @EntertainmentDailyFix