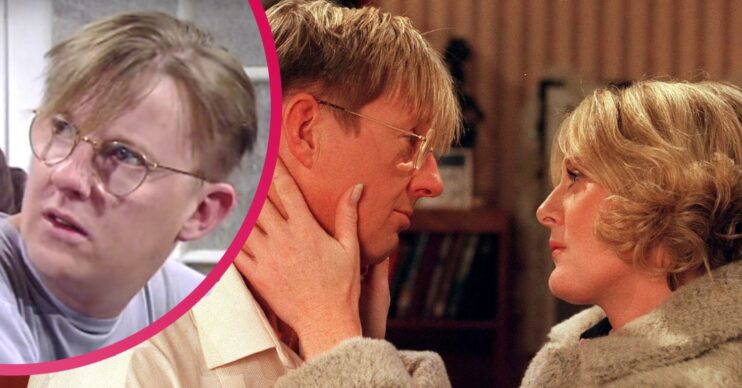 Curly Watts in Coronation Street: Who was he? Could he ever return to Weatherfield?

Curly Watts in Coronation Street was the bespectacled store manager from Bettabuy – and later Freshco – who won the heart of cobbles legend Raquel Wolstenhulme.

Curly first appeared in Corrie as a paperboy, working for Rita at the Kabin, briefly became a binman alongside Eddie Yates, and then landed the job at Bettabuy after completing a business course.

He worked with Reg Holdsworth at Bettabuy, and when Curly was sacked for sexual harrassment, he followed Reg to his new job at Firman’s Freezers, which became Freshco.

Read more: Coronation Street brings back a host of past faces for 2022

Curly – whose real name was Norman, though only Emily Bishop really called him that – dreamed of settling down and having a family but he had several disastrous romances over the years.

Eventually, his on/off relationship with Raquel led to marriage, much to Curly’s delight.

But Raquel was really still on the rebound after her ill-fated love affair with Des Barnes. Though she had proposed to Curly, their marriage didn’t last and after a year, she left Curly for a new life in Malaysia.

Unbeknownst to Curly, Raquel was pregnant when she left in 1996, and later gave birth to his daughter, Alice Diana.

Curly didn’t find out about his little girl until Raquel turned up three years later and asked for a divorce.

Who else did Curly marry?

Curly met policewoman Emma Taylor when she was investigating a crime on the cobbles and they hit it off.  There were tensions between them, however, when it came to Emma’s job – especially when she took on a role as an armed police officer.

More tensions arose when Emma lied in court to protect a colleague – much to Curly’s disgust.

In 2003, Emma and Curly left Weatherfield and moved to Newcastle where Emma had a new job.

Back in 2010, when DVD soap spin-offs were all the rage, Curly appeared in Coronation Street: A Knight’s Tale.

Brian Capron – who played infamous cobbles killer Richard Hillman – even had a cameo as Dickie the Boatman.

Fortunately the trend for comedy soap spin-offs seems to have passed!

Kevin only had small roles before landing the part that made him a household name but he was briefly in a band with Smiths members Andy Rourke and Johnny Marr – he could have been Morrissey!

Kevin’s married to Clare, and together they run a social enterprise foundation called Kennedy Street that helps addicts find help and support.

The couple have three children.

Kevin has been open about his desire to return to Coronation Street and never more than since Spider Nugent’s comeback was announced recently.

Spider and Curly were frenemies for a while on the show, and now Spider’s on his way back to the cobbles, fans are calling for a Curly return too.

And Kevin said on an interview on Loose Women he’d be more than up for it.

“Oh yeah. It’s no secret. I’m in the business of telling stories, always have been. Whether it be on stage, in music or telly,” he said.

“So to go back and tell what happened to him [Curly] I think would be very interesting, and I think maybe the viewers would be interested too.”

Would you like to see Curly back in the Street?

Or how about his kids? Alice would be 25 or 26 now, while Ben would be 21. Perhaps they’d make good additions to the cast?