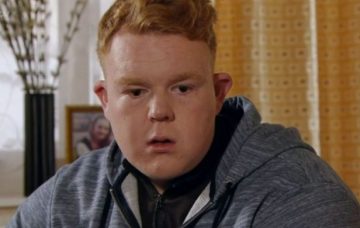 Is he hiding something?

Craig, played by Colson Smith, shows worrying signs of sickness – but is there more to the issues than meets the eye?

And, could his job be in danger, when the health problems start to affect his work as a policeman?

Next week, Craig is called into action when shoplifters target the Kabin.

As Brian Packham (Peter Gunn) races to get to the shop in time, Craig – who was minding the shop at the time – will decide to give chase and try and be a hero.

Determined to catch them and save the day, Craig is bitterly disappointed when he soon finds himself so out of breath that he has to give up. Not great for a copper.

But why IS Craig struggling with breathlessness?

In fact, on Friday (March 6), Craig reveals a truth about his health woes when his mum Beth drops a cake round for him.

Craig reluctantly accepts the sweet treat but points out he could really do with losing some weight.

Later, after he fails to catch up with the thief, Craig confides in Kirk how his colleagues at work make jibes about his size.

Craig tells his friend that it’s time he did something about the weight, and reveals his intention to get fit and take up running.

At Toyah’s insistence, Imran finds himself agreeing to join him on his fitness routine…

Colson Smith has portrayed Craig ever since August 2011, when his character was just a schoolboy.

Viewers have watched him grow, as well as see him battling Obsessive Compulsive Disorder, a condition Bethany helped him come to terms with.

Will Bethany’s imminent departure take its toll on Craig, too?

In real life, actor Colson has recently lost more than a stone – partly due to his fitness regime and cutting down on certain foods.

The actor, 21, revealed he lost a stone and a half while holidaying in Thailand, due to a nasty bout of food poisoning.