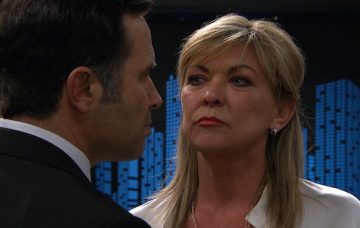 James and his evil mother have been estranged for years

Emmerdale fans are convinced James Tate is about to make an explosive comeback to the soap.

Kim Tate’s son hasn’t been seen in the village for two decades since he left with her when she fled after trying to kill Chris Tate.

But now, after Graham Foster was revealed to be hiding someone abroad in Friday night’s episode, fans think it might be James.

“We’ve got a problem,” Graham told a mystery person on the phone, adding: “We’re going to need another plan.”

Fans remember Kim telling Graham to find her missing son while she spent the last six months of her prison sentence inside.

And after she discovered he had been helping someone access her off-shore bank accounts to withdraw money, they think they know it’s James.

“We were told they were looking for someone to play James so it’s obvious who he’s talking to #Emmerdale,” said one convinced fan.

A second said: “Reckon it was James he was talking to, not Joe #emmerdale”

A third said: “Okay random theory which makes no sense but oh well, Graham got rid of Joe near the arches, could he have put him on a train and told James Tate to meet him at the station?

“James could be living abroad and looking after Joe? He might have called James? #Emmerdale”

Another said: “I’m sure the call was to James, but to be quiet honest, I really don’t care anymore Emmerdale.”

However the majority of fans still think it is Joe on the phone and it’s all proof he wasn’t really murdered by Graham last year.

But some have a more intriguing theory, noting the similarities between Graham’s secret phone calls to Kim before it was revealed she was coming back – and they think he could be speaking to Zoe.

One said: “I think he’s talking to Zoe to help stop Kim.”

Who do you think Graham was talking to? Leave us a comment on our Facebook page @EntertainmentDailyFix and let us know what you think!