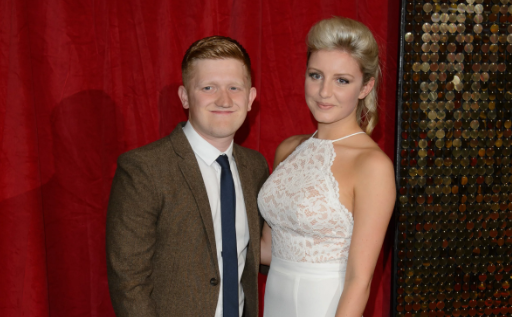 A chance encounter brought the pair back together

Coronation Street’s Sam Aston was delighted to tie the knot with his childhood sweetheart Briony Gardner this year.

But the 25-year-old has now admitted he nearly blew it with his bride after dumping her when they were teenagers.

The soap star, who has been on Corrie since he was 10, told the Sunday Mirror he first dated yoga teacher Briony a decade ago.

But he ended their relationship because they “lived quite far from each other” and had “different hobbies”.

He revealed: “We talked through MSN messenger and then went on a date. We got together, but we were very young. I ended it… We just didn’t see enough of each other. We split, but there was nothing bitter about it.”

It seems the couple were meant to be though as fate brought them back together years later.

Read more: Denise Welch has made a doc about women becoming lesbian in later life

Sam explains: “Three or four years later we were both helping out at the same drama workshop, Carol Godby’s acting school, which is where I started as a youngster… we went for a meal that night at a country pub and that was it. We’ve been together ever since.”

The pair became man and wife in May when they tied the knot at Stock Farm in Cheshire, surrounded by Sam’s Corrie co-stars including Jennie McAlpine and Andrew Whyment.

1 week of being husband and wife✨

Sam told OK! magazine it was an amazing and emotional day, and he’ll never forget the moment he saw his bride walking up the aisle.

“When I turned around and saw Briony, I thought she looked unbelievably beautiful. The ceremony was a surreal experience – it was joy on the highest level,” he said.

The couple have said they aren’t in any rush to start a family yet and want to enjoy life as newlyweds before thinking about having children.

Sam is going to be getting plenty of practice holding a baby at work as his Corrie character is about to have quads!

Have you been reunited with a childhood sweetheart? Leave us a comment on our Facebook page @EntertainmentDailyFix and let us know what you think!