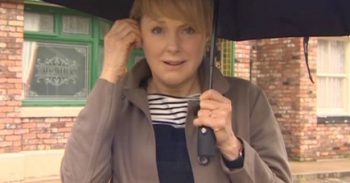 Slip of the tongue on Loose Women appearance?!

Coronation Street fans have tipped Gina Seddon to meet her maker in the factory collapse plot after Sally Dynevor appeared to drop a hint during a TV interview.

The Weatherfield legend – who plays Gina’s sister Sally Metcalfe on the ITV soap – was praising her co-star Connie Hyde (Gina) during a live chat when she changed from saying “it’s been amazing” to “it is amazing” working with Connie, prompting a flurry of tweets from’Corrie super-fans.

Speaking on Loose Women from the cobbles, Sally said: “I have to say it’s been… it is amazing working with Connie Hyde, she’s gorgeous and I love her so much. We’ve been so lucky.”

Afterwards, one Twitter user wrote: “Sally just said ‘it has’ been good working with Connie then changed it to ‘it is’ hmmm!! Gina dies? #Corrie (sic)”

Another posted: “Makes me think it’s Gina who dies after listening to how Sally was talking about her (sic)”

One shared: “Looks like Gina is being killed off then #LooseWomen #corrie #coronationstreet (sic)”

And some believe the fact Connie was appearing in the show’s studio while Sally was being beamed back from the cobbles via video link could also mean Gina may meet her maker.

One posted: “It could be obvious who dies… Sally is still at Corrie going by the video and Gina is at the studio with the loose woman presenters (sic)”

Sally, 55, admits she is always concerned soap bosses could axe her character every time there are similar storylines.

She said: “It’s going to be a touch and go evening… I don’t want to give anything away.

“I’ve been here for years but you never think you’re going to carry on being here. As an actor you think it could all end next week.

“So every time I get a script I’m excited about what is going to happen and where the journey is going to take us.”

Connie praised the production team for their huge efforts on the plot, admitting she felt as though she was in a James Bond film.

She added: “These episodes I cannot underestimate, it was like being in a Bond film.

“I think they took six weeks to film it. The special effects are incredible.”

Would you miss Gina?  Leave us a comment on our Facebook page @EntertainmentDailyFix and let us know what you think!