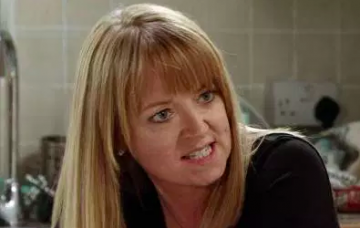 The Coronation Street star has issued her demands

Sally Ann Matthews has issued a chilling threat to Emmerdale bosses – bring back Mathew Bose, or else.

The actress plays the unhinged landlady Jenny Bradley in Coronation Street when not tweeting and she’s using her powers of social media for good.

Famous for her death stare on the cobbles, Sally has used it to demand Emmerdale’s new bosses bring back Mathew’s character Paul Lambert.

Television presenter Lorraine Kelly began the calls for Paul’s return in her column in The Sun.

She wrote: “I’m sure you recall Emmerdale’s Paul Lambert, who made a huge impact during his five years in the Dales.

“Paul was played by the ridiculously handsome Mathew Bose, who must have a painting in the attic because he hasn’t aged a day since leaving school.

“Surely his return is long overdue. His family are still in Emmerdale, including dad Rodney Blackstock, auntie Diane Sugden and his half-sisters. There are lots of layers to Paul, too.

“His alter-ego is drag queen Thelma Louise, while he and his boyfriend Jonny were the first characters in a primetime drama to have a civil partnership, back in 2008.

.@emmerdale Woe betide you if you let me down …. x pic.twitter.com/GYKxyN4zIj

“Surely such an interesting character should be welcomed back to Emmerdale with open arms.”

The words were enough to spring Sally into action and she wasted no time in tweeting to Emmerdale.

At first it started off quite nicely with her writing: “Yes @lorraine! Absolutely @emmerdale should bring back @mathewbose! x”

And then the Jenny Bradley death stare came out with the words: “@emmerdale Woe betide you if you let me down …. x”

He has returned briefly for stints in 2010 and 2015, most recently to appear at Paul’s mother Val’s funeral.

Mathew recently reunited with his former co-stars when he took part in ITV’s float at Leeds Pride earlier this year which could hint at his return.

Do you want to see Paul back in the Dales? Leave us a comment on our Facebook page @EntertainmentDailyFix and let us know what you think!