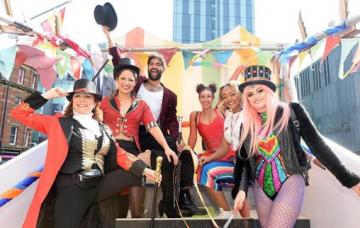 She'll always stand up for herself

Coronation Street’s Nicola Thorp bravely tackled protesters at Manchester Pride, as a fan filmed her telling them to “show some respect”.

Dressed in a circus master’s uniform of a red waistcoat and fishnet tights, Nicola attended the event alongside her former Coronation Street co-stars, and became heated in one particular exchange.

YES @nicolathorp_ – absolutely giving it to the #ManchesterPride protesters on Peter Street. “This is our church” pic.twitter.com/uZcGu9w64F

A fan on Twitter recorded Nicola telling protesters: “We shall not come and preach at your church. This is our church – show some respect.”

Retweeting the amazing video, Nicola wrote: “Forever proud to be an ally. For those protesting pride, you are outnumbered and you are outloved.”

The actress, 29, followed her tweet with a rainbow emoji to celebrate equality and the rights of LGBTQ+ community in Manchester.

Fans praised the star for her words, describing her as ‘a fantastic ally’.

One fan wrote: “You are incredible. Thank you so much for being an inspirational woman and a fantastic ally. The world needs more people like you.”

Sharing the sentiment, another added: “I love you so much. Thank you for being such a soldier for our community. It’s people like you who make the world better.”

Nicola’s former co-stars – boyfriend Charlie de Melo and Melanie Hill – also sported their own The Greatest Showman inspired costumes, while Hayley Tamaddon went all out as a performer in a red leotard and glitter face paint.

Our favourite outfit has to be Katie McGlynn’s who, embracing the rainbow, wore a glittery bodice, accessorised with a long pink wig.

Dolly-Rose Campbell chose a rainbow-striped dress for the event, while Bhavna Limbachia waved the rainbow flag aboard the float.

The theme for this year was ‘Circus of Acceptance’, and attendees have turned up in their thousands in an array of spectacularly colourful designs, worthy of the annual celebratory event.

This isn’t the first time Nicola has stood up for what she believes in.

Along with using her social media for a force of good for several campaigns, including a lobby for public places to provide tampons and sanitary towels, Nicola also contested Piers Morgan during a Good Morning Britain interview in June.

She fought against the TV host over whether paparazzi should be able to photograph women coming in and out of cars to an event.

She is also campaigning for a change in the law over work wear, after being sacked from a receptionist job for refusing to wear high heels. This girl stands her ground!

Which is your favourite Corrie Pride outfit? Leave us a comment on our Facebook page @EntertainmentDailyFix and let us know what you think!