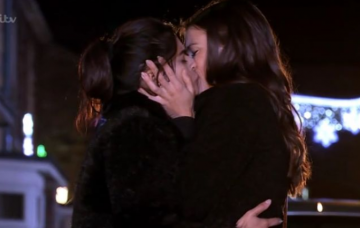 Will it last this time?

Coronation Street viewers breathed a sigh of relief as Kate and Rana were reunited on New Year’s Eve.

The couple’s romance has been on the rocks, with the issue of a baby and Kate cheating causing a rift between them.

But in Monday night’s episode the pair – who are a huge favourite with fans of the ITV soap – seemed to get things back on track.

Kate and Rana were spending New Year’s Eve apart, having called time on their turbulent relationship.

And the New Year wasn’t looking too hopeful when the exes found themselves in the Rovers.

Kate’s ex Imogen was also there and Rana looked upset as she gave Kate a big kiss on the cheek.

Kate and Imogen were about to head off into town when Rana was given a talking to by Imran and Toyah, advising her to put things right.

Rana went after Kate and, after a heart to heart they expressed their love and kissed.

Viewers were thrilled as they locked lips on the cobbles.

It was beautiful. When Kate looked back at Rana there was no question of her leaving her. They have fought through so much and now the future is theirs 💘

kate and rana are the cutest

Are you glad to see them back together? Leave us a comment on our Facebook page @EntertainmentDailyFix and let us know what you think!