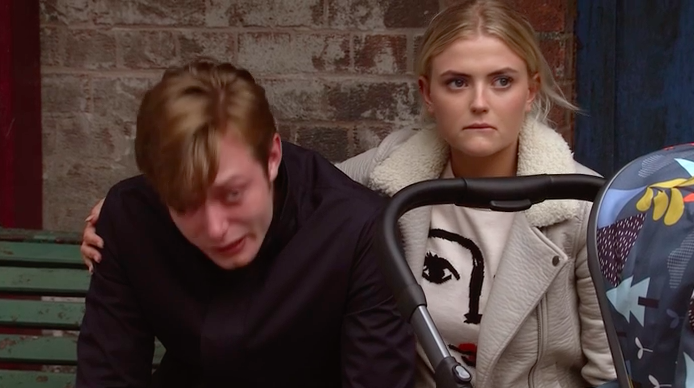 Bethany Platt is going to be caught comforting a grieving Daniel Osbourne next week in Coronation Street.

The pair shared a kiss when Daniel became desperate to feel anything other than dread and grief as Sinead lay dying.

They were caught by his dad Ken and he confessed to Sinead who later forgave him on her deathbed.

But the same cannot be said for Weatherfield’s other residents who have made it clear they blame Bethany for seducing a grieving widower.

And next week when Bethany finds Daniel upset in the urban gardens, she will thank him for defending her to others and try to comfort him.

However Beth catches her with her arms around Daniel and jumps to conclusions.

Still grieving for her niece, she tells Daniel: “Can you at least wait until your wife is 6 foot under?”

Fans were enraged when Bethany and Daniel kissed when Sinead was still alive, so any return to the storyline is sure to cause havoc afterwards.

She told her husband Daniel not to spend his life mourning her and she wanted him to move on, but not forget about her, before talking about what their life together would’ve been like.

As Daniel read Bertie a story, Sinead slipped away, leaving viewers devastated, as her husband realised she was gone.

On Twitter, an angry fan wrote: “This is a barbaric twist to the cancer storyline. Yes it happens in real life, but doesn’t need to be part of this story.”

Another added: “Am emotional about this storyline – brilliant acting – cervical cancer needs to be highlighted but, unfortunately again, the writers have ruined it by Daniel kissing Bethany. Why add that story to it, it’s not needed!?”

A third said: “Oh Corrie, not happy. You made it so tense and not letting Sinead go in peace but with memories of her husband’s betrayal.”

“Why add the Daniel and Bethany scenario? This is such a real story without that,” said one more, and another wrote: “Such a good storyline ruined by making him cheat on his dying wife. No need – pointless and stupid.”

What did you think of Daniel cheating? Leave us a comment on our Facebook page @EntertainmentDailyFix and let us know what you think!