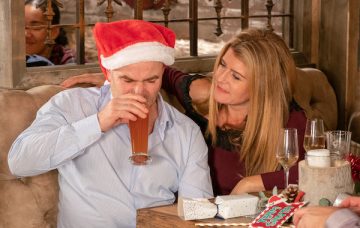 Lock yourself inside, Connie!

As an actress and self-confessed Corrie fan, Connie Hyde is thrilled to be at the centre of a huge Christmas storyline this December.

But she’s preparing to hide indoors after the big festive episodes, in which her character Gina Seddon doesn’t just stab her sister Sally Metcalfe in the back – she turns the knife a few times for good measure.

Read more: Corrie fans crushing on Imran in his pants as relationship with Toyah is exposed

And fans of Sally will be baying for blood at the scenes!

But, rather than stifle them and concentrate on getting her sister out of prison (for a crime she didn’t commit), Gina has in fact succeeded in driving a wedge between Tim and Sally.

Read more: Corrie fans “choked” as Fiz leaves Weatherfield – but is it for good?

She’s even been meeting with conman Duncan and believing all his lies about her sister – bad sibling!

In fact, Gina was even instrumental in getting Sally sent down after testifying in court and implying Sally DID have an affair with Duncan.

Spoilers have told us that Gina and Tim’s chemistry comes to a head over Christmas, and actress Connie has teased an explosive time ahead for Sally’s duplicitous sister.

Speaking to metro.co.uk about Gina’s big Christmas storyline, Connie said: “It’s exciting, because she’s only been in it a couple of years. So it’s an honour, really.

“I always watched it on Christmas Day, so to be on it is an honour and I’m looking forward to it.”

But she also admitted she’s expecting backlash from fans, saying: “I’ll probably be bombarding myself in the house, avoiding getting egged!”

She also suggested that long-term Gina is too “chaotic” for Tim, and that he’d “very soon get sick of her”.

Is Sally about to lose her husband as well as her freedom?

With a shock twist coming in the New Year meaning Sally is freed, we wouldn’t like to be in Gina’s shoes.

Do you think Tim would cheat on Sally with her own sister? Leave us a comment on our Facebook page @EntertainmentDailyFix and let us know what you think!