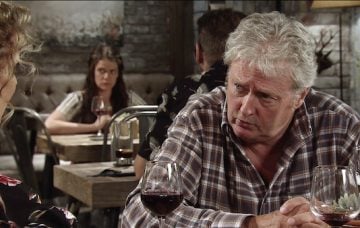 It's the storyline that has divided fans

Coronation Street’s storyline that has seen Jim McDonald return to the cobbles to scam his ex wife Liz McDonald, has caused more controversy than we realised, according to actor Charles Lawson.

Fans of the soap have watched in horror over the last week as Jim has plotted to get his hands on Liz’s cash by pretending that girlfriend Hannah is actually their daughter, Katie, who died back in 1992.

As the heartbreaking storyline gets under way, actor Charles Lawson, who plays scheming Jim, has revealed to The Sunday Post that the storyline was supposed to run for a lot longer…

“The scheduling didn’t work too well. Corrie asked me back for a year but I had already accepted Rebus by that point.

” They said, ‘What do you mean, no?’ when I told them I couldn’t do it. So I explained that I was doing Rebus and they should have checked earlier.

“There’s a general assumption in TV that you are available, but that’s not the case with me.”

With Charles’ commitments to his new theatre production, Rebus: Long Shadows, a stage adaptation of Ian Rankin’s well-known novels, the storyline that has seen Jim return to Weatherfield has been cut shorter than previously planned…

“They had to completely rewrite the storyline because I was only available from June to August.

“There was talk of me going back next year, but producer Iain MacLeod might have his own agenda, so I don’t know if that will still happen.

“I’ve been back about six times since I originally left, but it’s not something I take for granted or expect to happen every few years – they could just as easily kill me off.”

See ‘Rebus: Long Shadows’ at the King’s Theatre in Edinburgh between October 8th and 13th, and His Majesty’s Theatre in Aberdeen between November 12th and 17th.

Are you disappointed or glad this storyline is shorter than originally planned? Leave us a comment on our Facebook page @EntertainmentDailyFix and let us know what you think!