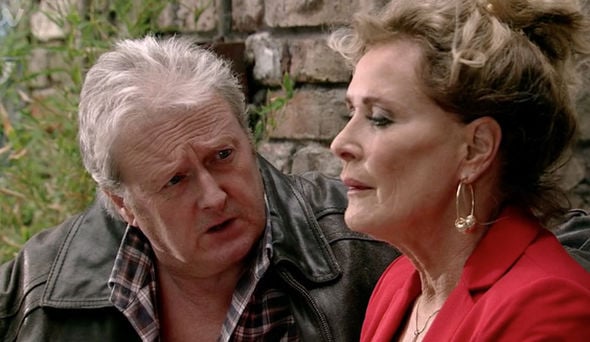 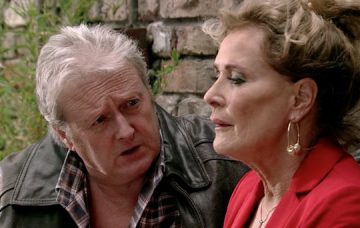 Fans can't wait to see Jim get his comeuppance!

Coronation Street fans were repulsed this week, when they discovered that popular character Liz McDonald is being horribly duped by her ex-husband.

Jim returned in dramatic style – gatecrashing his son Steve’s stag do and telling Liz some explosive news – and, even by soap standards, it WAS pretty shocking.

Fresh out of jail, he told Liz that the daughter they believed had prematurely died in 1992 was in fact alive.

And fans were in bits when Liz met Katie, now called Hannah, in emotional scenes.

But their tears soon turned to rage, when it was revealed that Hannah and Jim are, in fact, lovers – and scamming Liz all along.

“Disgusting”, “appalling” and “insulting” cried fans at the shocking twist.

While actor Charlie Lawson – who plays Jim – has defended the “gross” storyline, actress Beverley Callard, aka Liz, promises that Jim will get his comeuppance.

She continued: “We’re a long way off that now, but the scenes are just brilliant. You know you get the script and think ‘Oh that’s good, that’s good’ but, honestly, I could not wait to film them.”

The 61-year-old actress, who has played Liz since 1989, promises that Jim will pay for his crimes, adding: “Jim’s intentions are not very honourable and he feels betrayed and abandoned by Liz, Steve and Andy.

“His intentions are so deceitful and devious but deep down inside Jim is a very moral character and I think that begins to come through.”

After years of turbulence, Liz and Jim have often come back together, but Beverley makes it clear that this plan will be the last straw.

She told the newspaper: “With what we know now, it would destroy them. There would be no way back for him now with Steve, with Andy or with Liz.”

Vulnerable Liz is desperate to believe Hannah is her long-lost daughter, after a series of lows including her recent fling with Johnny – and subsequent rejection.

And, as for viewers who remember the tragic story when Katie died in 1992, Beverley wants to reassure them that the storyline won’t “minimise” the tragedy.

She said: “Losing a baby is so dreadful to anybody and when we played those scenes 26 years ago, we loved doing them and they were so well-written.

“At first we were a bit worried about that side of things because we didn’t want it to minimise what we’d done all that time again, but it doesn’t in any way.

“As the story goes along you will see that.”

Are you looking forward to seeing the storyline unfold? Leave us a comment on our Facebook page @EntertainmentDailyFix and let us know what you think!