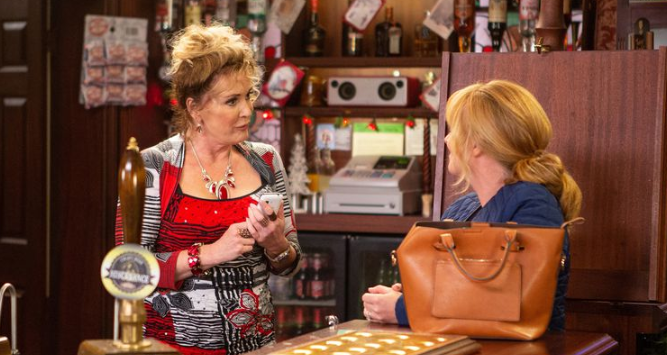 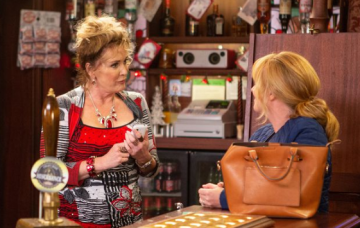 What a time to let Liz down after the year she's had!

There’s never a good time to be fired, but Christmas has to be the worst.

Season of good will to all men? Bah Humbug!

Poor Liz McDonald is on the receiving end of the boot over the festive period in Corrie.

Former fling Johnny Connor is desperate to save his marriage, as Jenny’s behaviour grows ever more frightening.

But actress Bev Callard thinks her losing the pub job is a good thing, telling Digital Spy: “I’m quite pleased that she’s not in The Rovers.

“Because the set… they’ve put LEDs [lights] in now and it’s very draining, so for me it’s great because I also love working in the Medical Centre with Louiza [Patikas], who plays Moira.”

It may only be a temporary absence from The Rovers for the popular barmaid, though.

“I think Liz thinks she will be back in The Rovers at some point,” Bev added.

I think Liz would buy it back at some point and you know the paneling they’ve got? She’d paint it burgundy and she’d have lycra curtains or something, wouldn’t she?”

Yesterday we revealed how Bev thinks her co-star, Charlie Lawson, who plays Liz’s estranged husband Jim, could be back in Weatherfield.

He was driven out this autumn after Liz discovered his sick scam to steal her money for medical treatment.

He had pretended his con woman lover Hannah was actually Jim and Liz’s late daughter Katie in order to trick his ex.

But when Hannah exposed the truth by kissing Jim to force him to leave, Liz was furious and attacked him at Katie’s grave.

“I don’t think they are finished,” Bev told a recent press day. “The way Charlie and I played it towards the very end, they were coming together again.”

She added: “He played it with a sense of remorse and that he really did love Liz.

“I really hope they bring him back. I think maybe he’ll somehow get the money to give back to Liz.”

And she has the perfect plot to bring him back – inspired by Hollywood film Whatever Happened to Baby Jane.

The film sees a disturbed former film star torturing her wheelchair-bound victim by serving up a parrot on a platter.

She says: “I would love that, serving him a budgie for his dinner. That would be great, though, wouldn’t it?”

Bev adds: “Someone from the top floor, where all the powers that be are, said he comes back in a wheelchair. Liz is like ‘time for din dins Jim!'”