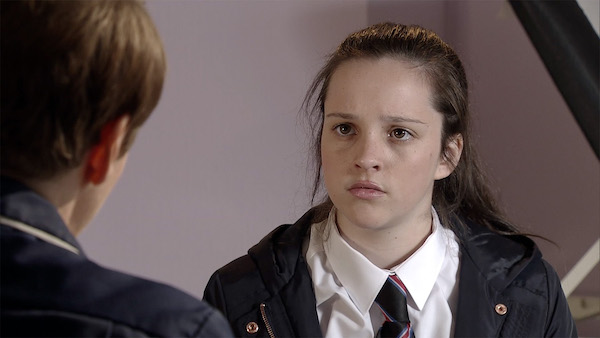 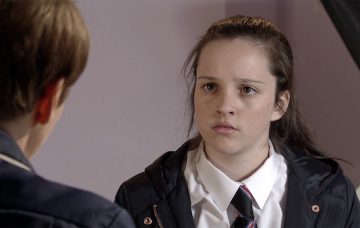 But is this storyline really stale?

Soap fans have hit out at Corrie’s latest teen pregnancy storyline, claiming the show’s writers need to freshen up their scripts.

The 14-year-old Weatherfield character had barely registered the result on her pregnancy test during Friday night’s second episode before viewers took to Twitter to express their frustration at there being another underage mother living on the cobbles.

And many of those watching also felt they could see where the storyline could go, with many predicting Amy’s baby – if she has it – could end up being brought up by her parents Steve and Tracy – or even Kate and Rana.

According to reports, dad Steve will hit the roof when he discovers his young daughter is in the family way after she initially turns to granny Liz for advice.

But after she urges the schoolgirl to tell her parents the truth, Steve – who has already sussed out Amy’s secret after discovering his discarded test –  explodes in a fit of rage before vowing to hunt down the dad-to-be before a panicked Amy can reveal her news.

“I’ll tell you why she didn’t flipping tell us,” he rants.

“Because she’s 14 and she let someone get her up the duff!”

However, some fans are already rolling their eyes at the dramatic developments which are believed to see the likes of Dev’s son Aadi and even Amy’s cousin Simon suspected of being the baby’s father.

“AMY BARLOW IS PREGNANT [bleep] OFF,” bellowed one disbelieving observer.

Another added: “This Amy Barlow storyline is so [bleep] stupid we’ve had so many teen pregnancies on Corrie and it’s like teenage girls on the soap can do nothing else but have babies.”

A third continued: “Amy is still a wee baby in my eyes. Not ready for yet another teenage pregnancy and all that shiz.”

And a fourth suggested scriptwriters could do with moving away from ‘played out’ storylines.

“I love Corrie, but your writers really need to start writing something new & fresh,” they said.

Another fan felt Amy getting pregnant was repeating a similar 2015 storyline for Faye – then supposed to be 12 – too soon, although they backed 16-year-old actress Elle Mulvaney to ace it.

“Feeling quite wary of this story, especially so soon after Faye’s story, but if anyone can pull it off, Elle can – she’s a cracking little actress,” they tweeted.

Reports claim thug Tyler Jefferies – who has terrorised the Barlow family for month – will be revealed as the tot’s dad.

And his demands to be part of the child’s life will lead to a messy and painful legal battle.

It is thought Amy will eventually decide to put the baby up for adoption – but could Tracy and Steve intervene and bring it up as their own?