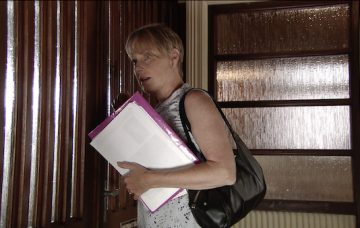 She finds out he's bedding both Toyah AND Leanne

Sally Metcalfe learns that cobbles naughty boy Imran Habeeb has been sleeping with sisters Leanne and Toyah Battersby next week.

The former mayor of Weatherfield – who is currently fighting a fraud case – finds a list of names in the cafe that has been dropped by the dishy solicitor.

She heads over to Barlow’s Legal Services to hand it back when she hears Imran and Adam Barlow talking about what he’s up to with the Battersby sisters.

The girls are unaware that they’re both seeing the same man and both make plans to see him that night.

Over at the office Adam advises Imran that he needs to draw up a list of pros and cons so he can choose between them.

But it’s not long before Toyah heads over and things get saucy between her and Imran – who really must be suffering from exhaustion.

As Sally heads over with the list of names she found she overhears Adam telling Imran that he can’t carry on sleeping with both sisters.

She also hears Imran admit that he’s lost a list of witnesses in the fraud case against Sally and his client Duncan Radfield.

Which is the very same list Sally is holding in her hand at that moment.

Sally isn’t impressed with Imran’s dogg-ish behaviour and tells Leanne and Toyah that he’s been sleeping with both of them.

The girls are livid that Imran has been leading them both on and come up with a plan to teach him a lesson.

They visit him and tell him that they’re cool with him dating both of them and offer him a double-date with them both later.

A stunned Imran gets an even bigger shock when later, at the Bistro, the girls order champagne and promise Imran the night of his life – with them both.

Is Imran being taken for a ride? And what are they planning?

Does Sally do the right thing?Leave us a comment on our Facebook page @EntertainmentDailyFix and let us know what you think!