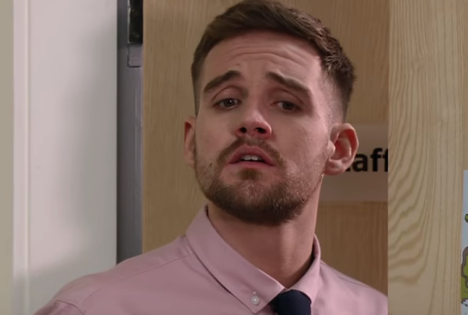 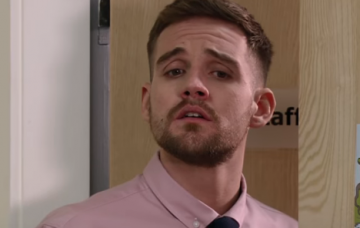 Weatherfield’s resident doctor looks like he has just stepped out of a surgery gone wrong in shocking new Coronation Street pics taken during filming on location.

Dr Ali Neeson – played by James Burrows – is seen covered in blood in the shots published in The Sun, apparently showing the aftermath of an awful car crash in woodland.

It is not clear whether Michelle’s son was behind the wheel of the dark blue car – or even in the vehicle at all – that appears to have had an off-road prang seen in the background of the paparazzi images.

However, what is certainly evident is Ali’s hands are splashed with a deep red colour – and it seems unlikely the doc has been picking blackberries in the forest.

But is it his blood, or somebody else’s?

And with that amount of blood sloshing about, will whoever it came from live or die?

Another man – middle-aged and dressed in a suit – can also be spied in the pictures, and he appears to have a head wound.

The Sun is reporting that the man is Michelle’s uncle.

According to reports, stunt doubles were on location for the shoot suggesting scenes will be action-packed.

Dr Ali has kept his cards close to his chest since returning to the cobbles as a regular character in Weatherfield earlier this year.

His relationship with his biological mum has improved, despite a recurrence of his long-running bust up with Ryan (who he was swapped with at birth) and a brief fling with Carla Connor.

Could this mysterious smash reveal other secrets Ali has been hiding away from his nearest and dearest on the Street?

Viewers can expect these scenes to air later in the autumn.

Until then, it appears Dr Ali may have other run-ins with the law on the horizon.

A sneak peek at images showing storylines set to unfold in the next few weeks reveals a chat with DS MacKinnon is in Ali’s future.

What do you reckon Ali has got himself into? Let us know what you think of this story by leaving us a comment on our Facebook page @EntertainmentDailyFix!