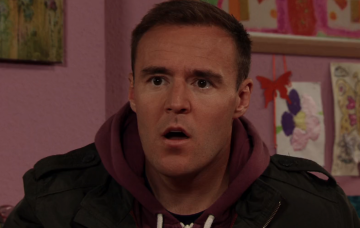 Corrie SPOILER: Tyrone arrested and Evelyn is to blame!?

What's the battle-axe responsible for now?

She’s already complicated his life massively by moving in and not leaving, driving a wedge between Tyrone and Fiz – who we heart – stealing from Vera’s jewellery box and aggravating Hope’s behaviour from naughty to ‘psycho’.

Of course, Fiz and Hope are now planning to LEAVE Weatherfield for a bit of peace and quiet!

Well, that’s what we think anyway…

In upcoming scenes, however, Tyrone is going to find himself in hot water with the police – and naturally his acid-tongued granny is involved.

New spoilers tell us that Tyrone is questioned and possibly even arrested after been suspected of no good.

In an upcoming storyline, Tyrone is left with some serious explaining to do when he heads off on a mission to spy on his grandmother.

The new storyline sees Tyrone keeping close tabs on Evelyn, who is lodging with a kind-hearted disabled man named James.

While Tyrone means well and just wants to check up on one of his few remaining family members, lurking about in the bushes peeping through windows doesn’t look good!

Whilst keeping tabs on his grandma, Tyrone is spotted by police, who think he looks dodgy.

When his implausible story – something about his nan’s cat called Keith! – arouses the policeman’s suspicions further, it looks like Tyrone could be in trouble for stalking!

But all that will be nothing when Evelyn finds out he’s been following her!

In fact, when she comes outside to see what all the fuss is about, Evelyn makes it quite clear to the police officer that she doesn’t have a cat and that Tyrone is lying!

Sounds like some classic comedy Corrie scenes in the making!

In scenes tonight (Wednesday 5 December), Fiz leaves the Street after enrolling daughter Hope in a new school in Birmingham.

Fiz and Tyrone hope the school will help with Hope’s troubled behaviour.

Jennie McAlpine – who plays Fiz – is on maternity leave following the arrival of her second child Hilda in October.

Are you a fan of Evelyn? Leave us a comment on our Facebook page @EntertainmentDailyFix and let us know what you think!