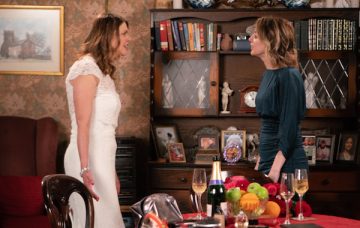 The blushing bride is on the warpath - will the wedding go ahead?

Tracy Barlow is on the warpath in Coronation Street next week when she mistakenly accuses Abi Franklin of sleeping with Steve McDonald behind her back.

Of course it wasn’t Abi that Steve did the horizontal cha-cha with two weeks before his wedding, but Leanne Battersby.

Steve and Leanne were caught in a compromising – i.e naked – position by Tracy’s brother Peter in scenes last week.

Peter was so incensed at catching Steve and his ex-wife at it, that he told Steve he could no longer be his best man and wouldn’t be attending the wedding.

Tracy becomes suspicious after Beth tells her she’s spotted Steve leaving Abi’s after their final dance lesson ahead of the wedding.

She tells Tracy what she’s seen and a furious Tracy then confronts Abi, railing at her for sleeping with Steve.

Abi is stunned but Tracy storms off and vandalises Michelle’s car in her fury, knowing that mechanic Abi will get the blame for it.

With a face like thunder, Tracy heads off to marry Steve – will the ceremony go ahead?

To be fair to Steve, there was some confusion after Tracy told him he had a free pass ahead of their wedding.

The StreetCars owner thought she was giving her blessing to sleep with another woman, not realising that Tracy was actually talking about a free pass for the spa at the hotel they were getting married in.

Steve was caught with his pants down this week after mistakenly believing fiancee Tracy Barlow had given him the A-OK to play away.

Dozy Steve, who is having second – and third, and fourth and quite a few more thoughts – about getting wed yet again may not have to worry about it after his blunder.

What will happen when – because it’s always when not if – Tracy finds out that it was actually Leanne – mother of Steve’s son Ollie – who he really slept with?

Nothing good, we’ll wager. Watch your back, Leanne.

Will Tracy kill Leanne? Leave us a comment on our Facebook page @EntertainmentDailyFix and let us know what you think of this story.