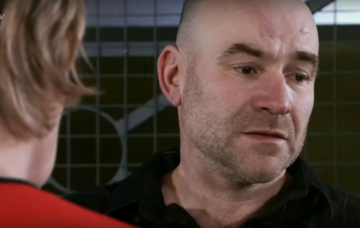 Cabbie explodes when he realises the truth

Coronation Street’s Tim Metcalfe will explode in rage and fury this Christmas Day after he realises infatuated sister-in-law Gina has duped him.

And as Gina’s lies are exposed, Tim is left looking like a right prize prat as he comes to terms with the fact wife Sal did not have an affair with conman Duncan Radfield – and so it is only Tim who has strayed, having slept with Gina the night before.

Only moments before Tim’s violent outburst, viewers will see him confess to Sally about his indiscretion with her sister.

Having avoided visiting Sal on numerous occasions in the run up to the big day, Tim knows he will have to man up and face the truth and decides to own up on Christmas Day itself.

For Sally, whose other lone festive highlight may be playing Buckaroo with Abi Franklin as they both spend the holidays caged up in prison, this will no doubt be a Christmas to forget.

A preview clip of this year’s Yuletide episodes shows her face fall as his confession falls from his lips.

But it also gives a glimpse of the dramatic fallout as Sophie lays bare Gina’s dishonesty, with Tim flipping the dining table – and everyone’s turkey with all the trimmings – over in a fit of anger.

Having met up with Duncan herself, Sophie announces Gina has been meeting with the man who framed Sally.

But as Gina tries to defend herself, she eventually admits it all – including that she is head over heels in love with Tim.

Unsurprisingly, this does not impress Tim who – unable to process his shame, guilt, exasperation and embarrassment at the time – sends the roast spuds and sprouts being eaten by him, his dad Geoff, Yasmeen and Gina flying.

What hope for Tim and Sally now? It might take a Christmas miracle to keep the Metcalfes together.