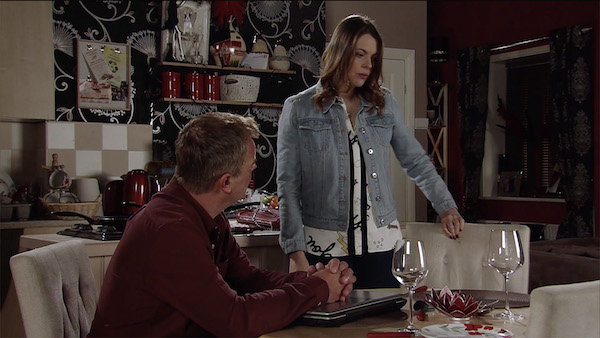 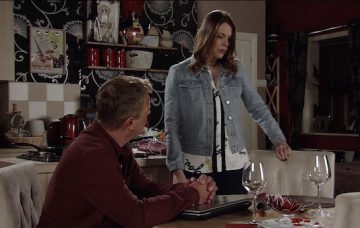 Corrie SPOILER: Steve’s back – can he save his marriage?

More to the point - does he even want to?

A very angry Steve McDonald arrives back on the cobbles next week, explaining how new wife Tracy left him with no passport or wallet in Morocco.

Tracy arrived back alone from their honeymoon last week, boasting about how she’d abandoned Steve in the desert as payback for sleeping with Leanne behind her back.

Their daughter Amy is appalled to hear what Tracy did and – knowing they’ve let Amy down again – Steve pleads with Tracy to give their marriage another shot.

Later Steve’s day gets even worse when he falls out with his mum Liz about his lack of sympathy over the whole Hannah/Jim situation.

Meanwhile Tracy is feeling pretty rubbish about herself when Abi tells her she’s considering putting the twins up for adoption as she’s lost all hope of getting them back.

Tracy is horrified by Abi’s suggestion and vows to help her so-called friend get her kids back from care.

Elsewhere, Steve is suspicious when he finds the laptop from the garage stashed in the Street Cars flat and is shocked when he watches the CCTV footage of Tracy sabotaging Michelle’s car.

When he confronts Tracy about it, he’s gobsmacked when she explains she thought he was having an affair with Abi and deliberately messed with the car so Abi would lose her job.

When she confesses that Abi could now lose her kids for good too, Steve is horrified and soon Tracy is heading off to the police station.

Will she clear Abi’s name?

And will Steve still want to make their marriage work after seeing again how vindictive Tracy Barlow can be?

Should Steve and Tracy give their marriage a go? Leave us a comment on our Facebook page @EntertainmentDailyFix and let us know what you think!