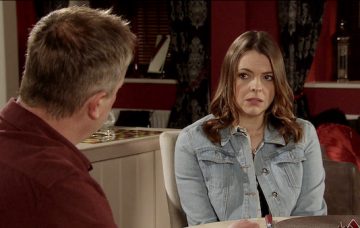 He finds the missing laptop from Webster's Autos

Steve McDonald is back in Coronation Street next week after being abandoned by new wife Tracy Barlow in a Moroccan desert on their honeymoon.

Read more: Corrie Steve returns – but can he win back Tracy?

And when he realises that they’ve let their daughter Amy down he pleads with Tracy to give their marriage a proper chance.

But will he feel the same when he finds out how she’s stitched up her so-called friend Abi Franklin?

Steve is concerned when he finds the missing laptop from the garage stashed in the flat above Street Cars.

Intrigued he takes a look at the CCTV footage and is horrified when he sees Tracy tampering with Michelle’s car.

He confronts his wife about it and she admits to sabotaging the car when she thought Steve was having an affair with Abi.

Steve is shocked and Tracy explains she thought Abi would lose her job, but it’s now looking like she could lose her twins for good too.

Filled with guilt, Tracy heads to the police station. Is she about to do the right thing for the first time ever?

Corrie fans know that while Tracy’s woman’s instinct about Steve cheating was right, she was way off the mark with who he cheated with.

The cobbles Casonova had actually slept with Leanne, mother of his son Ollie.

Needless to say Tracy was less than pleased when she found out about Steve and Leanne – punching him in the face during their first dance before telling all the guests what he’d done.

She’ll be even less happy if rumours that Leanne will fall pregnant again with Steve’s baby are true.

Actress Jane Danson is well behind the theory too, saying at a recent press day: “I quite like that theory. I think she should be. I think that’d be hilarious!

“I think that would be quite funny, because Steve is notorious for his one-night stands and getting people pregnant, isn’t he?”

Jane also said stupidity is what keeps bringing Leanne and Steve back together.

She added: “I think they’re both essentially quite similar. They’re both pretty stupid and they make bad decisions.

“They’ve known each other all their lives and they both clearly like a drink. It all just goes a bit wrong when they’ve been drinking together.”

Will Tracy do the right thing? Leave us a comment on our Facebook page @EntertainmentDailyFix and let us know what you think!