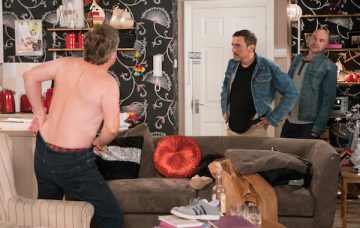 Steve McDonald can’t believe his luck next week when his soon-to-be-wife Tracy offers him a free pass.

Tracy is worried that Steve’s getting cold feet over their upcoming wedding and to prove how much he means to her, she offers him a free pass.

Steve is delighted, thinking she means he can sleep with another woman but Tracy is just talking about a free pass to the spa at the wedding venue.

Tracy encourages him to use the pass and fill his boots, leaving Steve puzzled.

He tells Tim what’s happening and Tim warns him to be careful because it could be a trap.

But Steve’s mind is already racing ahead and he begins to eye up Abi when they have a dance rehearsal for Steve’s wedding dance.

Later he tells his friend that he can’t marry Tracy because he doesn’t love her, will he act on his free pass.

Meanwhile a distraught Tracy calls Peter because Amy has fallen over at the spa and is in hospital.

She can’t get hold of Steve so Peter goes in search of him, but the factory boss is stunned by what he sees when he finds him.

Later Steve begs Peter to keep his secret. But will he?

Steve and Abi have already shared a kiss earlier this year which Tracy doesn’t know about – yet.

While the kiss between Abi and Steve wasn’t officially Steve’s fault, there is still a moment between the pair that definitely shouldn’t have happened.

Tracy’s already forgiven Steve for trying to kiss his ex Michelle Connor on her wedding day so it’s unlikely she’ll be happy to over look Steve cheating with her friend!

Some fans even think the discovery could lead to Tracy murdering again!

Be afraid Steve, be very afraid…

Do you think Steve and Tracy should get married? Leave us a comment on our Facebook page @EntertainmentDailyFix and let us know what you think!