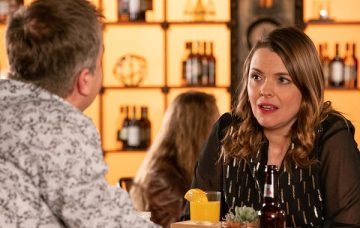 Coronation Street SPOILER: Steve and Tracy to have a baby?

Could we be hearing the pitter patter of tiny feet again soon?

Their daughter has threatened to divorce them but it seems that hasn’t put Steve and Tracy off procreating again! Well, Steve isn’t at least…

When they arrive back from their holiday in Tenerife with daughter Amy, Steve is clearly in a very loved-up mood, so much so that Tracy is struggling to keep up with Steve’s libido!

Tracy confides in Beth about his voracious appetite, who reveals any talks of babies puts Kirk’s flame out.

This gives Tracy the idea to put Steve off sex by suggesting they try for a baby!

Mary warns this plan could easily backfire if Steve actually warms to the idea of having another baby, though.

But Tracy is reassured when she and Steve go out for lunch at the Bistro, and he admits he doen’t really want a baby.

However Steve, who is also dad to little Oliver, soon changes his mind and presents a horrified Tracy with an ovulation kit.

Tracy and Steve had Amy together in 2004, and in 2011 she got pregnant with twins by Steve but sadly she miscarried.

Steve also has one-year-old son Oliver with Leanne Battersby. He also had son Rauri with Michelle Connor but Rauri was born prematurely and was pronounced dead shortly after his birth.

Although Tracy isn’t keen on the idea of having another baby herself, fourteen year old Amy is set to get pregnant this year.

According to The Sun, the teen will struggle to adapt to motherhood leading to a custody battle between Tracy and the father’s family.

So Steve and Tracy could end up raising their grandchild.

Would you like to see Steve and Tracy have another baby? Leave us a comment on our Facebook page @EntertainmentDailyFix and let us know what you think!