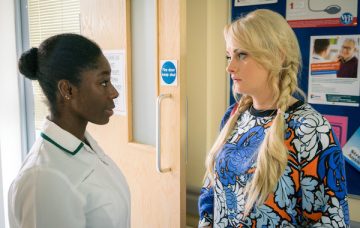 She's dealt a very cruel blow at her 12-week scan

Sinead Tinker reveals her baby heartache to her auntie Beth next week as the storyline that will see the quirky machinist diagnosed with cervical cancer kicks off.

Sinead tells Beth that she’s 12 weeks pregnant, but then confesses that she’s been bleeding for four of them.

A horrified Beth tells her niece that she really needs to get the bleeding checked out but Sinead admits she’s afraid to find out that something is wrong with the baby.

As she and Daniel head off to the 12-week scan, Sinead is relieved to see that everything seems fine with her little bundle of joy and the couple are delighted to see their baby on screen.

But then Sinead sends Daniel off on a non-existent errand and tells the sonographer about the bleeding.

Hoping it’s nothing to be worried about, Sinead is thrown when she’s then examined by an obstetrician who tells her that there’s a lump on her cervix that needs to be looked at urgently.

Sinead is then gently told that it could be cancerous and if it is she’ll need chemotherapy and will possibly even need to consider terminating the pregnancy.

Sinead is mortified and heads home where Daniel tells her he had got a letter from his mum Denise with who he has a strained relationship.

As he tells her it means nothing to him because all he cares about is her and the baby, Sinead decides to keep the news to herself and secretly books herself in for a biopsy.

Will she reveal her heartache to Daniel or will she shoulder it alone, hoping it’s nothing serious?

Sinead recently revealed to Carla Connor that she’d been bleeding and was worried she was losing the baby, leading fans to fear the cancer storyline was about to kick off.

After an argument with Carla about using some of the factory’s silk to mend a jacket for Cathy, Sinead was called into the office at work for a chat with her boss.