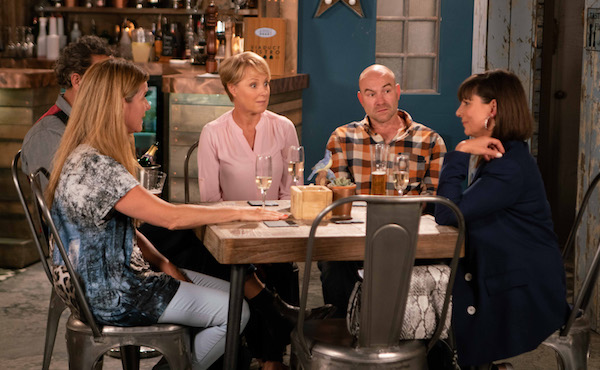 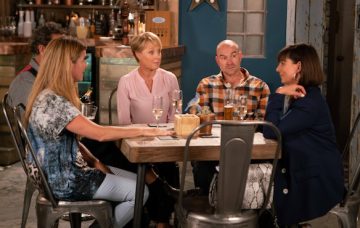 Is she pushing the pair closer together?

Sal, who’s currently being investigated for fraud, thinks that Gina has developed feelings for her ex-husband Kevin Webster.

Not wanting Gina and Kevin to end up together, Sal decides to set him up with Paula Cunliffe, her friend from school who is representing her in her fraud case.

Blissfully unaware Sally doesn’t realise that Paula already has someone in her sights – her daughter with Kevin, Sophie.

So when Kev announces he’s going to take Gina to a football match, Sally steps in and says she’s organised a date for him.

Kevin is surprised, but happy to head out with Paula. Meanwhile Sally tells Tim that he has to take Gina to the match.

Gina is delighted by the outcome but has Sally accidentally pushed the pair closer together?

Gina took a shine to her brother-in-law after she split from boyfriend Dev Alahan recently.

Tim kindly took her in saying she could stay with them as long as she needed to.

He then revealed that he’d had a go at Dev for the way he treated Gina and that he didn’t deserve her.

Gina’s heart was warmed by Tim’s words and since then she’s been trailing after him like a lovesick puppy.

This week fans will watch as Sally becomes convinced Gina has a crush on Kevin and decides to do something about it.

She starts having suspicions that her newly-single sister Gina has got her sights set on Kev.

Wanting to nip Gina’s crush in the bud sharpish, Sally organises a dinner party where she plans to set Kevin up with her friend Paula.

But Sally’s way off the mark as Paula only has eyes for daughter Sophie and Gina is more interested in Sally’s husband Tim!

Meanwhile Sally and Tim have been having their own problems since fraudster Duncan Radfield stole £40000 of charity money from the council and told police that Sally was involved.

Duncan also claimed that he and Sal had been having a sordid affair and Tim has struggled to move on from what’s been said, even though he defended Sally by attacking Duncan.

Corrie fans have already taken to Twitter to predict that Tim and Gina will have an affair.

It was recently revealed that Sally would be spending time in prison for fraud, despite being totally innocent.

Earlier this year, Duncan got his hands on a council grant – with help from a gullible Sally – after claiming that he was setting up a charity foundation in memory of his late wife.

But, little did Sally know, the foundation didn’t really exist and Sally only realised she’d been duped when it was already too late.

Sally and husband Tim are left furious that Barlow’s Legal Services agree to represent him.

After Sally is framed and arrested, she faces a tough battle ahead to clear her name.

Do you think Gina and Tim will have an affair? Leave us a comment on our Facebook page @EntertainmentDailyFix and let us know what you think!