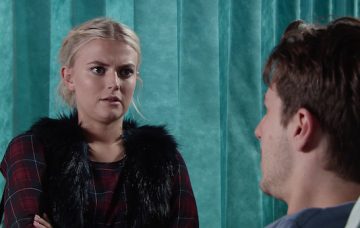 Bet she didn't see this coming

Ever since the devastating car crash that left Ryan fighting for his life, and gangster Ronan meeting his maker, the Connors have been struggling with what happened on that fateful day.

With Ali Neeson fighting his guilt at helping Ronan to die after forcing him to remove a fence post that had impaled him, knowing it would lead to him bleeding to death, the focus has all been on the GP as he struggles with his conscience.

But the official Coronation Street website revealed today that next week sees the next phase of this storyline begin to play out as Ryan confesses to Bethany that he’s been having dark nightmares about the day of the crash.

Despite not being directly involved in Ronan’s demise, it seems the horror of what happened has left Ryan struggling to cope, giving him night terrors.

Despite keeping his nightmares to himself until now, Ryan opens up to an unsuspecting Bethany, who is certainly not a stranger to coping with horrific things that have taken place in the past.

After being groomed by evil Nathan Curtis last year, Bethany knows all about how to live your life while struggling to cope with dark thoughts, meaning she is the perfect person for Ryan to talk to.

But as Ryan starts to open up to his friend, will Bethany be able to offer him the support that he so desperately needs?

And with the couple getting closer, could this secret confession from Ryan spark more romance between the pair?

Watch these Corrie scenes next week from Monday 5th November from 7.30 on ITV.