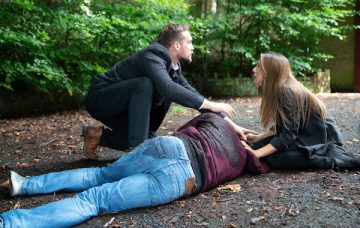 Will gangster Ronan finish him off as he seeks revenge for Cormac's death?

Ryan Connor is hit by a car and left for dead next week as gangster Ronan Truman seeks revenge for the death of his son Cormac.

Cormac died in the flat Ryan lives in with mum Michelle, her fella Robert and her biological son Ali.

Ryan – along with Sophie and Bethany – were planning a night out clubbing when Cormac whipped out a bag of pills.

Horrified, the girls fled the flat, with Ryan hot-footing it after them, desperate to convince them he wasn’t taking drugs.

But while he was out Cormac had a bad reaction to the drugs he’d taken and Ryan came home to find him fitting on the floor.

Panicking, he called medic Ali instead of an ambulance, a mistake that cost Cormac his life.

Later, the police came to question Ryan and he was arrested when they discovered an bag of pills in his pocket, planted there by Cormac.

Cormac’s dad Ronan is less than thrilled to hear of Ryan’s involvement in his son’s death and is soon hell bent on getting revenge.

Robert is worried when he finds a wreath on his car, and another arrives at the flat.

Meanwhile Michelle decides that enough is enough and heads off to confront Cormac herself.

She arrives at Cormac’s wake and pleads with Ronan to see that Ryan was only trying to help his son.

But Ronan is having none of it and looks at Michelle with utter contempt.

She later returns and tells Ryan and Ali that they’ve got no choice but to ask for police protection as Ronan is hell bent on revenge.

They get into the car but soon realise that Ronan is following them.

They realise they’ve got no choice but to go on the run and Michelle is horrified when her car engine suddenly dies on her.

Ryan stumbles out of the vehicle and is left with his life hanging in the balance as Ronan drives right at him.

Are you looking forward to these dramatic scenes? Leave us a comment on our Facebook page @EntertainmentDailyFix and let us know what you think!