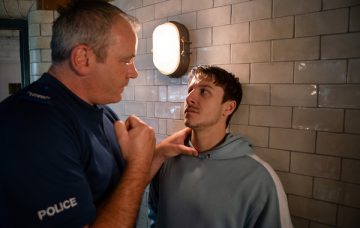 The DJ realises he's in big trouble in the big house

Ryan is left terrified in prison next week when he’s attacked by a corrupt prison officer.

The hapless DJ is given a beating by the guard who reveals he’s in cahoots with drug baron Ronan Truman.

Ryan is in prison after being arrested following the death of Ronan’s son Cormac.

Michelle Connor’s son was friends with Cormac who died following a bad reaction to some pills he took before a night out clubbing.

Ryan had come back from a heart to heart with Sophie Webster to find Cormac fitting on the floor of the flat.

Terrified that Cormac – who had just been released from prison for drug dealing – would be in huge trouble if he was caught with drugs again, he called his sort-of brother Ali instead of an ambulance.

Al was livid and forced Ryan to call one as he tried to give Cormac lifesaving. CPR

But Cormac ended up dying before the paramedics arrived.

Ryan then lied to police and said he’d come back to find Cormac already dead and pleaded with Sophie to lie to the police for him.

Ryan will be seen trying to flee Weatherfield later this week before being apprehended by the police who find a bag of pills on him, planted there by Cormac before his death.

The police warn him that if they match the ones in Cormac’s system, he’s in huge trouble.

But Ryan wants to stay inside when he hears that scary Ronan is waiting for him on the outside and plans to get his own back for his son’s death when he next see Ryan.

Meanwhile, while Ryan is getting battered by the corrupt guard, Ali learns that he’s been suspended from work for his part in Cormac’s death.

When a bruised Ryan returns home, Ali is unsympathetic telling him he’s been suspended because of him.

Things go from bad to worse as Robert finds a wreath on his car and another one arrives at the flat.

Is Ronan planning on killing Ryan? An eye for an eye and all that?

What will Ronan do to Ryan? Leave us a comment on our Facebook page @EntertainmentDailyFix and let us know what you think!