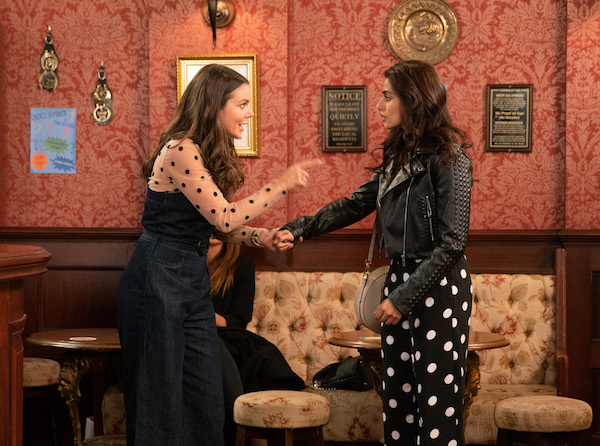 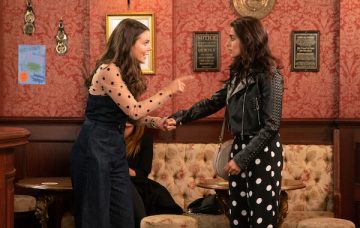 The girls seem set for a happy ending - or do they?

Kate Connor and Rana Nazir are reunited next week and they both have a question for the other.

Rana’s been on a cruise with her mum, but she returns early desperate to see her girlfriend.

But Kate’s a bit disappointed as she was planning to meet Rana at the port and pop the question.

Read more: Coronation Street’s Robert to become a dad – but not to Michelle’s baby

Annoyed her plans have been thwarted, Kate decides she’ll just have to do it another way. But she has no idea Rana’s asking Johnny for her hand in marriage at that very moment!

Johnny’s thrilled and happily agrees to the girls getting wed.

When Kate and Rana are finally reunited in the pub they both can’t wait to propose without realising the other one can’t wait either!

The girls produce ring boxes at the same time and are shocked to realise what the other was planning.

Getting down on one knee together (they’re so in sync, it’s so cute!) they swap rings and agree to get married.

Kate’s family are thrilled, and Johnny and Jenny throw an engagement party to celebrate having some happy news for once.

But obviously a happy ending never lasts long in Weatherfield and when Kate makes a speech, her words flaw Rana.

Kate tells everyone she thinks Rana will make an excellent mother and the look on Rana’s face says it all.

Fortunately, Kate doesn’t clock it, but Rana’s brother Imran does and corners his sister. He tells her she has to be honest with Kate now before it’s too late.

Will Rana tell her the truth?

The girls have already faced their fare share of obstacles to get here with Rana being married to Zeedan and hiding her sexuality from her religious family.

And things between them have been strained ever since Rana lied to her dad on his deathbed that she was no longer seeing Kate.

We so want the girls to have their happy ending, but can the wedding even go ahead with such a huge obstacle in front of them?

Should Kate and Rana get married? Leave us a comment on our Facebook page @EntertainmentDailyFix to let us know what you think!