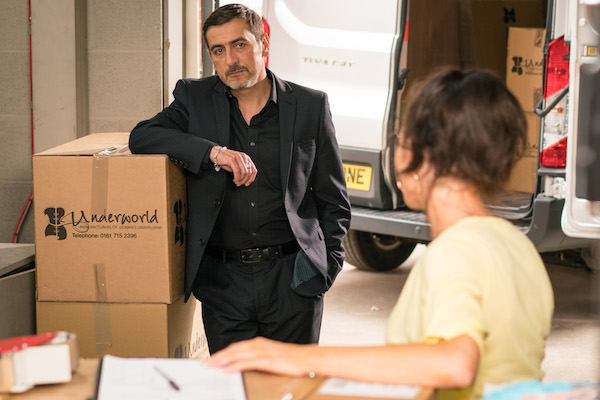 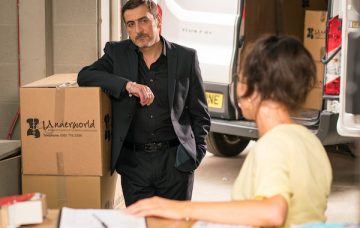 It’s not often we find ourselves having sympathy for Simon Barlow, but we have to feel sorry for him next week.

After trying to do the right thing and stand up against bully Tyler in court, despite all the warnings, his life hasn’t got any easier since Simon was sent down.

Next week the gang are still targeting him and grab his school bag before ripping up all his homework.

Peter is fuming when he finds out and goes off to find Tyler’s mum to see if she can do anything about the bullying Simon is still being subjected to.

But when he tracks Vicky down, Peter is astonished to see how angry she is at Simon who she blames for sending her son to prison.

Later in the week Peter is gobsmacked when he sees that Carla has hired Vicky to work in the factory.

He rages at her and tells her to fire her, but Carla refuses to back down.

In actual fact she can’t afford to lose another machinist as both Beth and Kirk are off sick. She tells Peter to get over it.

But Peter isn’t back down either and promises Simon that he’ll make sure Vicky doesn’t stick around at Underworld.

Simon is horrified though and tells Peter to leave her alone as he’ll just make things worse for him.

Peter is forced to tell Vicky her job is safe but on the condition that she tells Tyler to call the gang off of Simon.

Will she agree? Or has Peter put his son at even greater risk?

Simon and Tyler were both in court recently for breaking into Adam Barlow’s flat and attacking OAP Flora McArdle.

Tyler threw a jewellery box at the pensioner which knocked her out before fleeing.

Simon decided to stick around and do the right thing by making sure Flora was ok, even though it meant facing up to the police himself.

He was in trouble with his former friend after telling the police about Tyler’s involvement and the gang have been targeting him ever since.