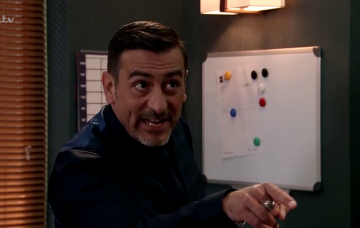 The half-siblings clash BIG time in an upcoming episode of the ITV soap...

The half-brothers aren’t exactly pally at the best of times, but volatile Daniel goes nuclear when Sinead is suspended from her job at Underworld.

Read more: Why the NTAs were so wrong to snub Corrie’s suicide story

Daniel is furious when he discovers his new wife has got into trouble at work following an argument with her co-worker Vicky.

During the finger-pointy confrontation, Peter sneers at Daniel, saying: “Who do you think you are? Coming in here telling me how to run this place?”

Daniel accuses Peter of sexual discrimination because of Sinead’s pregnancy, but Peter denies the claims, insisting he knows the “rules and regulations”.

As Daniel claims Peter has the “problem of no empathy”, Peter makes it clear his only problem is a family that “does his head in”.

After the pair throw some more nasty insults at each other, Peter stands firm that Sinead is still suspended, while Daniel warns him his business won’t do well if he carries on with that attitude.

Next week, we see Sinead take a funny turn on her way to the factory, Abi get arrested and Jude up to his old tricks again…

Viewers were devastated earlier this month when Sinead went for a routine baby scan, but was told the heartbreaking news that she has cervical cancer.

She was also told that she needs to seriously consider terminating her pregnancy so she can begin intensive chemotherapy as quickly as possible.

Only Ken knows the truth after he discovered her in ball of grief and tears – but how long can he keep her secret for?

Are you Team Peter? Or are you Team Daniel? Leave us a comment on our Facebook page @EntertainmentDailyFix and let us know what you think!