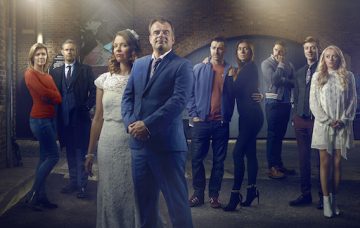 The reason for his return becomes clear

Nick Tilsley reveals the real reason he’s back in Weatherfield next week when he calls in to see his ex Leanne Battersby.

Fans know that when Nick fled the cobbles just over a year ago, he left Leanne well and truly in the lurch.

But this new life involved selling the flat that Leanne and Olly were living in, forcing her to camp out at the Rovers with sister Toyah and ex-husband Peter.

After having a trip torn off him by Toyah about leaving Leanne in the lurch, he pays her a visit and tells her he’s sorry for the way he treated her.

He confesses he feels terrible about how much he lets her down and promises her that he wants to make it up to her.

But is it too little too late for Leanne?

And how does this fit in with the rumours that Nick has returned to the cobbles a married man?

turning in time for Tracy and Steve’s wedding, Nick tries to lick his wounds while keeping his estranged wife a secret from everyone.

However, furious at being spurned, she tracks him down for answers…

Although we don’t yet know who will play his wife, an insider told the Daily Star: “When news broke that Nick was returning to Corrie, there were lots of questioning over why. Now it seems he’s run away from his wife.”

As Nick seems set on a divorce, perhaps fan theories will come true that he’ll eventually end up with either of his former lovers Carla or Leanne.

Trouble is, that’s all a bit complicated at the minute…

Leanne has been dating Imran, but has just slept with Steve, while Carla still has a thing for Peter!

Jane Danson, who plays Leanne in the ITV soap, recently admitted she’d love her character to reunite with Nick.

She said: “Ultimately Nick is the love of Leanne’s life. They’ve been through so much.

“They were teenage sweethearts and his mum, Gail, hates her. It’s always been like Romeo and Juliet!

“So I would love it if they could settle down for good. Sometimes people do end up happy on Coronation Street!”

Are you excited to see Nick back in Weatherfield? Leave us a comment on our Facebook page @EntertainmentDailyFix and let us know what you think!