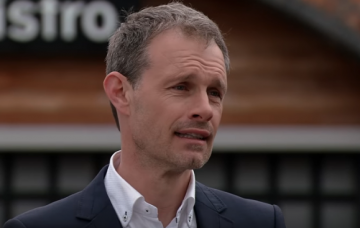 Gail's son is back on the cobbles, but why has he returned?

Nick Tilsley makes an unexpected return to Coronation Street next week but why is he back and what does he want?

Corrie bosses are keeping the details of Nick’s return under their hats but we can  reveal that it’s his feelings for ex-wife Leanne Battersby that call him back to the cobbles.

It might be Leanne that’s made Nick return but he doesn’t know that another ex, Carla Connor, has also returned in his absence leading many to suspect that the old love triangle is about to resumed.

Do you think Nick and Carla will reunite? Leave us a comment on our Facebook page @EntertainmentDailyFix and let us know what you think.