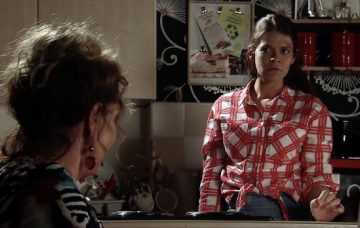 Liz McDonald is in danger of losing her life savings to scheming Hannah next week as the Aussie con artist continues to pretend to be the barmaid’s long lost daughter.

Hannah – who along with Liz’s ex Jim is claiming to be their daughter Katie who supposedly died shortly after birth – tells Liz that the hospital are denying any wrong doing.

Jim and Hannah – with the help of a fake DNA test – have managed to convince Liz that Weatherfield General mixed their baby up with another one at birth, leading to their real daughter being taken home by the wrong parents.

Hannah is also saying she has myotonic dystrophy, the same degenerative genetic condition Jim has and has convinced Liz that she urgently needs some expensive treatment in America.

The sneaky minx also tells Liz that she doesn’t have time to wait for the court case to pay out compensation as it could take months of even years.

Liz does some research and discovers her ‘daughter’ needs £25k for the treatment and she offers Hannah her life savings.

She’s distraught when she discovers that she can only raise £10k and promises Hannah that she’ll help her get the rest of the money somehow.

Meanwhile Jim is doing some scheming of his own and when Steve lets slip that Liz and Johnny had a fling, he spots another opportunity to make some speedy cash – blackmail.

Jim then tells Hannah that he’s going to get the money from Johnny so they don’t need to take Liz’s money.

But with Hannah already getting jealous about Jim’s feelings for his ex, how will she take this news?

One thing’s for sure, Jim really shouldn’t be trusting a woman who can so easily pretend to be another woman’s long dead daughter.

And what will happen when Liz discovers the truth and loses her daughter all over again?

Beverley Callard who plays the leopard-print loving lady recently revealed that Jim would feel Liz’s full wrath when the truth comes out.

Fresh out of jail, Jim told Liz that the daughter they believed had prematurely died in 1992 was in fact alive.

And fans were in bits when Liz met Katie, now called Hannah, in emotional scenes.

But their tears soon turned to rage, when it was revealed that Hannah and Jim are, in fact, lovers – and scamming Liz all along.

“Disgusting”, “appalling” and “insulting” cried fans at the shocking twist.

While actor Charlie Lawson – who plays Jim – has defended the “gross” storyline, actress Beverley Callard, aka Liz, promises that Jim will get his comeuppance.

She continued: “We’re a long way off that now, but the scenes are just brilliant. You know you get the script and think ‘Oh that’s good, that’s good’ but, honestly, I could not wait to film them.”

The 61-year-old actress, who has played Liz since 1989, promises that Jim will pay for his crimes, adding: “Jim’s intentions are not very honourable and he feels betrayed and abandoned by Liz, Steve and Andy.

“His intentions are so deceitful and devious but deep down inside Jim is a very moral character and I think that begins to come through.”

Are you looking forward to seeing the storyline unfold? Leave us a comment on our Facebook page @EntertainmentDailyFix and let us know what you think!