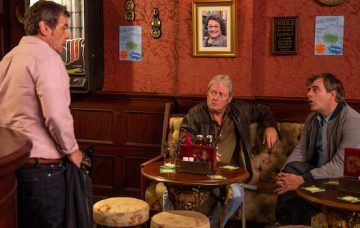 Jim McDonald spots an opportunity to make some money next week when he finds out about Liz and Johnny Connor’s fling.

At the start of the week Jim starts to become suspicious when he realises that something is awkward about Liz and Johnny.

Steve lets slip that Johnny and Liz had a one night stand and Jim is jealous.

But he soon realises that he could actually profit from the situation and begins to blackmail Johnny.

Meanwhile Jim partner-in-crime Hannah has been trying to swindle Liz out of her life savings.

Jim tells her not to bother with Liz’s money any more as he’s going to get it from Johnny.

But Johnny isn’t as easily spooked as Jim was hoping and he confronts Liz, asking if she told Jim about their fling.

Liz denies all knowledge and Johnny turns to Carla for support, revealing he’s being blackmailed.

Carla tells him to call the blackmailer’s bluff and ignore it.

Will Jim reveal Liz and Johnny’s fling to the whole of the Street?

Johnny and Liz hooked up earlier this year, shortly after Johnny lost his son Aidan to suicide.

Distraught Johnny pushed everyone away from him, shutting out his wife Jenny.

In fact, Liz was the only person he felt he could talk to about his son’s tragic death and they quickly became very close indeed.

What do you think of Jim’s return? Leave us a comment on our Facebook page @EntertainmentDailyFix and let us know what you think!