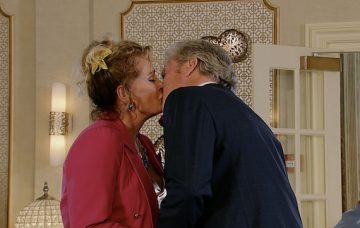 She agrees to give their love another try, but is she heading for a fall?

Liz and Jim McDonald look set to rekindle their love next week, as Jim confesses to Liz that he’s never stopped loving her.

Jim has recently returned to the cobbles after a stint in prison after holding up a post office to get Liz the money to buy the Rovers Return back in 2012.

When he returned though, he wasn’t alone and introduced Liz to Hannah.

Liz was shocked to learn that Hannah was actually their daughter Katie, who Liz and Jim believed had died as a baby back in 1993.

Jim revealed that Hannah had tracked him down via his military records as she discovered her parents weren’t really her biological mum and dad.

Liz was stunned but after being show a DNA test by Jim, accepted that Hannah was her long-lost child

But fans of the soap were left horrified when Jim and Hannah were later seen snogging each other.

It turned out that Jim and Hannah were lovers trying to con Liz out of her life’s savings, rather than having an icky relationship.

When Jim declares he’s still in love with Liz, he tells Hannah that the money from Liz’s account has come through and urges her to leave without him.

Liz then tells Jim that she wants to give things another go and Hannah is left questioning if Jim’s feelings are genuine rather than part of their scheme as he insists.

She decides to stick around and at the wedding of her ‘brother’ Steve, sidles up to Johnny Connor and tells him he needs to hand over £5k or she’ll tell Jenny about his night with Liz.

Will Johnny comply – or will Hannah drop a huge bombshell, unmasking herself as a fraud in the process?

Last month Liz actress Beverley Callard revealed that her character will be furious at Jim when she discovers his deception.

What will Liz do when she finds out the truth? Leave us a comment on our Facebook page @EntertainmentDailyFix and let us know what you think!